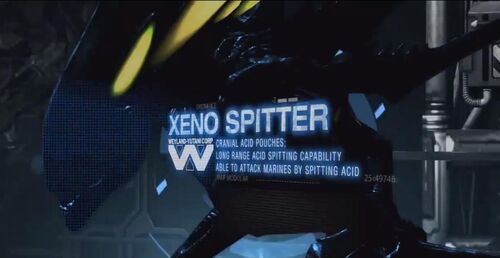 Xeno Spitters are aliens on LV426 from the Aliens: Colonial Marines campaigns.

These aliens are similiar to a Xeno Boiler a group of Aliens unique to the Aliens: Colonial Marines campaigns that appear on LV426, they can attack for a distance lurking in the shadows, scuttling over walls and ceilings to sneak up before an attack. They are also a playable character in Team Death Match when playing as an Alien.

The aliens in the game Aliens: Colonial Marines feature a new 'Evolved' alien cycle, this allows for new hybrids and a way of avoiding a 1 egg equals 1 alien principal. During gameplay a lower ranking Alien can 'Evolve' from a Xeno Lurker/Xeno Soldier to a Crusher or Queen.

Similiar to a Xeno Boiler. The alien has an increased size head and depending on it's Carapace, different alignment of sacks of powerful acid. The weapon on its tail is different from a boiler, instead of being blade like, it is almost like a double bladed axe.

In Aliens: Colonial Marines the Aliens have cranial acid pouches with long range acid spitting capability and are able to attack marines by spitting acid, Xeno Spitters require a charge up of their capability before firing acid blood. In an attack these aliens posses final finishing moves like all Aliens: Colonial Marines Aliens, one of these attacks is similiar with a Xeno Boiler, regurgitating acid on a marine killing him instantly.

In multiplayer you can switch between the different forms of Aliens as you respawn, configuring their attacks and kill moves before the game as well as in game.

These Aliens are similiar to Spitter Aliens that appear in singleplayer and multiplayer in the game Aliens v Predator 3 and in Alien Resurrection (film) but those Aliens lack the cranial acid pouches.