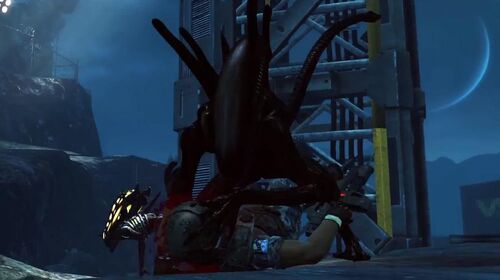 Xeno Lurkers are aliens on LV426 from the Aliens: Colonial Marines campaigns.

These aliens are similiar to a typical drone alien that appears on LV426 and BG386, these Aliens are faster and will spy on the player characters' activities and they tend to lurk in the shadows, scuttling over walls and ceilings to sneak up before an attack. They are also a playable character in Team Death Match when playing as an Alien.

The aliens in the game Aliens: Colonial Marines feature a new 'Evolved' alien cycle, this allows for new hybrids and a way of avoiding a 1 egg equals 1 alien principal. During gameplay a lower ranking Alien can 'Evolve' from a Xeno Lurker/Xeno Soldier to a Crusher or Queen.

Similiar to a Warrior Alien and a typical drone Alien.

These Aliens have an extra capability of wall and ceiling climbing over the other Aliens and a form of focus allowing it a focus attack on a marine. In an attack these aliens possess final finishing moves like all Aliens: Colonial Marines Aliens, one of the finishing moves The Impaler is a tail strike on a marine killing him instantly and The Maw is grab from behind head bite.

In multiplayer you can switch between the different forms of Aliens as you respawn, configuring their attacks and kill moves before the game as well as in game.

The films Alien, Alien 3, Alien Resurrection and Alien v Predator all have Aliens that are similiar to Xeno Lurkers and Drones.