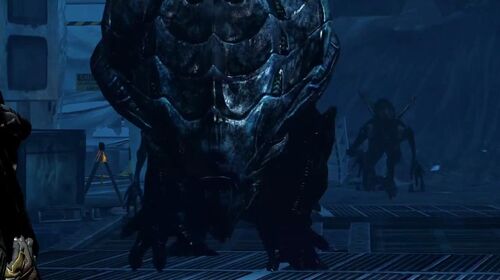 Xeno Crushers are aliens on LV426 from the Aliens: Colonial Marines campaigns.

These aliens are similiar to a Praetorian alien that appears on LV426 or BG386, these aliens have distinctive head armour and are an increased size alien xenomorph, they attack as a single alien, they are also a playable character in Team Death Match when playing as an Alien.

The aliens in the game Aliens: Colonial Marines feature a new 'Evolved' alien cycle, this allows for new hybrids and a way of avoiding a 1 egg equals 1 alien principal. During gameplay a lower ranking Alien can 'Evolve' from a Xeno Lurker/Xeno Soldiers to a Crusher or Queen.

The Crusher uses it's size as a weapon smashing into things, this Alien will always attack Marines. They are equipped with an armor-plated head, a brutal charge and stomp attack and incredible strength.

A Xeno Crusher first appears in the level The Raven and then again in Hope in Hadley's, Winter, Cruz and O'Neal need to defeat the Xeno to continue.

Also known as a Smasher, a Xeno Crusher is a difficult Alien to kill by a single Marine, with either a Pistol, Shotgun or Pulse Rifle, these Aliens are best tackled by a group of Marines.

Other versions of the Xeno Crusher are the Smasher and Crusher from Alien vs. Predator (arcade game).