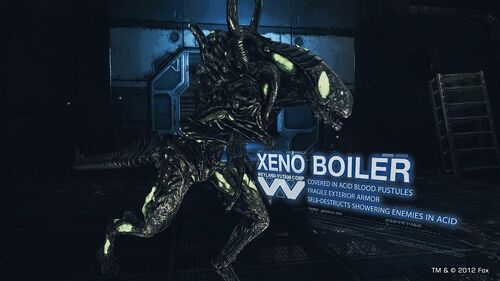 Xeno Boilers are aliens on LV426 from the Aliens: Colonial Marines campaigns.

These aliens are similiar to the Xeno Spitters from the same campaigns they are covered in 'acid blood' pustules with fragile exterior armor, when they attack they self-destruct showering enemies in acid. This Alien appears in both single and multiplayer, in singleplayer/co-op the Aliens are attracted by sound and movement approaching a marine but stopping if a marine stops and is motionless. In multiplayer a player can select a Xeno Boiler as a mutation of the Alien they are already playing but is only selectable on certain maps and locations, when the Alien isn't moving it stays frozen and motionless and grey in colour. One of the other features of this Alien is it's quickness of pace but it is unable to wall climb and predominately walks on it's hind legs.

The aliens in the game Aliens: Colonial Marines feature a new 'Evolved' alien cycle, this allows for new hybrids and a way of avoiding a 1 egg equals 1 alien principal.

Similiar to a Xeno Spitter Alien.

These aliens primarily attack from behind, having approached they will then shower their enemy with 'acid blood'. In an attack these aliens possess a final finishing move like all Aliens: Colonial Marines Aliens, one of the attacks is the Alien exploding killing a marine instantly.

Xeno Boilers first appear in the level The Raven, Winter, O'Neal, Bella and Reid encounter them in the sewers under Hadley's Hope.

An alien unique to the Aliens: Colonial Marines campaigns.