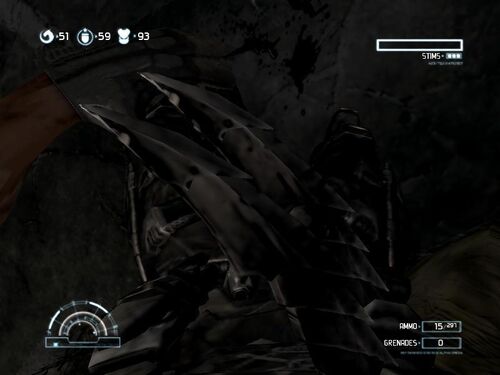 Wrist Blades are part of a Predator's armoury.

Wrist Blades are a weapon that all Predators possess, these are typically between 30 - 35cms long and retract when not in use. In most situations they are constructed so as to fit around the data communicator which is also worn on the wrist.

Made from ploy-synthetic alloy, in a retracting housing with is attached to the wrist. They can be worn on both arms or on one, serving both in combat and defense. A single bladed or dual bladed array, the ploy-synthetic alloy blades are both hardened and razor sharp, they can withstand most uses, but under certain situations have failed.

A useful weapon to possess both in attack and defense, either as a main weapon or as a secondary weapon. These require no plasma energy, which can be a problem for some weapondary. Wrist Blades in combat are used as a defensive block, capable of stopping light attacks, and in attack can be used for both focused and non-focused light attack and in a heavy attack causing more damage but requiring an unhindered attack.


In the games AVP: Evolution and Predators™ (i-pad), Predators are able to complete new combos which take far more attacks achieving the same damage with the Wrist Blades then in other games.


Predators (Film)
In the film Predators wrist blades are single bladed like the film Alien v Predator but are on one arm, Predators are also equipped with Arm Blades which can be fired like a spear as in Alien v Predator (Film) and Predator 2 (Film), a Predator is also capable of repairing his damaged Wrist Blades with a Tageting Laser.

AVP: Evolution
The Berserker in the game has 1 single long wrist blade on each arm and a players' character (Predator) has 2 wrist blades on each arm.

Predators™ (i-pad)
A players' character (Predator) has 2 wrist blades on each arm, these are normal in length.