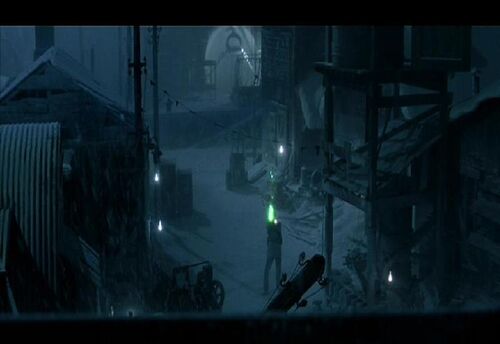 Alien v Predator (film)
A Pyramid beneath the ice near to the Whaling Station was discovered by a satellite which detected a mysterious heat bloom beneath 'Bouvetøya', an island about one thousand miles north of Antarctica. Before the station had been abandoned for over 100 years, there was a thriving fishing community until the last group of Predators arrived for an Alien hunt in the Pyramid. 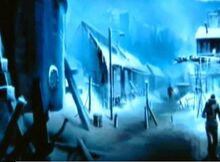 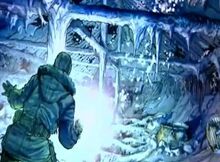 Concept artists drew concepts of pyramids based around Aztec mythology and were their gods arrived in giant spacecrafts, these ideas were carried over into the film, with the film starting in Cambodia 3000BC, as the story goes Predators arrive on Earth and battle against waves of Aliens, if they lose they activate their wrist communicator's self-destruct killing themselves and the Aliens at the same time. Richard Bridgland production designer on set was tasked with bringing these concepts to life. 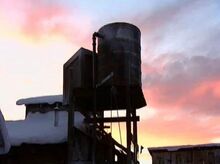 Filming started in Prague for the Whaling Station, the set being set in Antarctica because it is considered as a hostile environment as the conditions were also against the exploration group and not just the Aliens and Predators.

Paul Anderson wanted a strong female similiar to Ripley in the Alien films cast in the lead role who would play along side other guides and archeologists and Weyland the financier of the expedition.

With the desire to use real actors in the roles, suits were made by ADI with Predator masks keeping the basic design from the first two Predator films but with added detail. Made in clay then cast in fiberglass and painted in a metallic colour and weathered, the film saw distinct new characters emerge with their unique designs and styles including Elder predators who had more detailed engraving and piercings displaying their age and battle status. 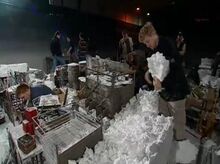 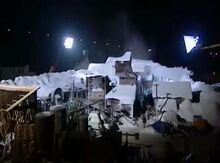 Paul Anderson's spec for the creatures included Predator's wrist blades which were made longer. Under the skin remote controlled mechanical muscles were used giving the facial controls of a Predator's expressions giving them increased range of movement. The lead Alien was built with both hydraulic and animatronics which required six puppeteers for it's control.

Lucian Stephenson who had been in charge of the snow effects used fifteen-twenty tons of artificial snow which was brought in and sprayed on the surfaces of the Whaling Station, this gave it the effect and longevity which would have been difficult to achieve with real snow.

John Burno visual effects supervisor constructed all miniatures on set for the satellite, icebreaker, chopper, pyramid and all the buildings around the Razorback Whaling Station. The Whaling Station which was built full size was also built on a one third scale and in miniature, a system of slidable frames under the built miniatures allowed for the collapse for the installation into the water after the final predator detonated his wrist communicator. The one third size model allowed for filming and panning with the the full size for character filming.

In filming of the exterior green screens were used for both the Whaling Station and Pyramid, post production effects would then add the on set character filming with either matte backgrounds or modeled environments. While on set markers and LEDs gave locations for actors to interact and the same markers helped in editing. Multiple filming angles and cameras allowed for various frames to be used as the composites were added together.

The Whaling Station above the underground Pyramid was established in the early 20th century.