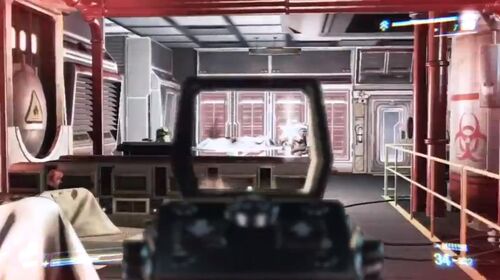 Weyland-Yutani Facility is an installation on LV426 (Acheron) the middle of 3 moons that orbits the gas giant Calpamos and features in the Aliens: Colonial Marines campaigns. A facility built for the research of the Derelict and Aliens. The facility contains the areas; Armoury, Central Command, Containment Rooms, Stasis Rooms, Medical Laboratories and Security Module.

The group O'Neal, Winter and Bella make their way for the Facility in the level For Bella, a damaged structure possibly from the impact of debris from the spacecrafts USS Sulaco and USS Sephora that only moments earlier were orbiting around LV426. As they enter by the Armoury they find that there are active sentry guns, this area then leads them into Central Command, once there they retrieve any information from the terminals and continuing their route which leads them into an outdoor area with the Derelict not far away and Dropships patrolling above, this area takes them to a lift to the lower and next level still continuing in the Facility. In this area were they try and save Bella, contains the laboratories, here Bella dies and soon after they are confronted by WY-Grunts and WY-Hazmats in the containment, stasis, med labs and the laboratories rooms which are linked by corridors.

Needing to deactivate a Power Module leads into an outside area and to another part of the Facility surrounded by a high electrified perimeter fence. In this area power module deactivation is performed by pulling cables out from power cells once completed a main switch cuts off all power.

The Security Module is found in the next level, Rampart, here a Queen is held for producing eggs and a large cargo hold is used for the repair of APCs and other vehicles, the Derelict becomes visible once again after exiting the Security Module.

As they continue, the route leads them into the Origin facility, through the Derelict and into one of the chambers used for the research of the spacecraft, a lift takes them up and through corridors to the Derelict's Orrery and Pilot's Chair with multiple corridors leading away, one taking them to the outside. Once they've destroy the AA guns they rendezvous with Hicks, Bishop and Cruz.

Weyland-Yutani Facility in Aliens: Colonial Marines is a different installation from the Weyland-Yutani Research Facility that appears in the game Aliens Extermination.

Although referred to as Origin Project in one audio log in another it say that the Derelict and surrounding building enclosure is called Origin and is separate from the Weyland-Yutani Facility.

In one of the audio logs it mentions that the Weyland-Yutani Facility is surrounded by a high electrified perimeter fence with one generator and no back up with the need to construct 3 or 4 fences securing the area from the alien infestation.