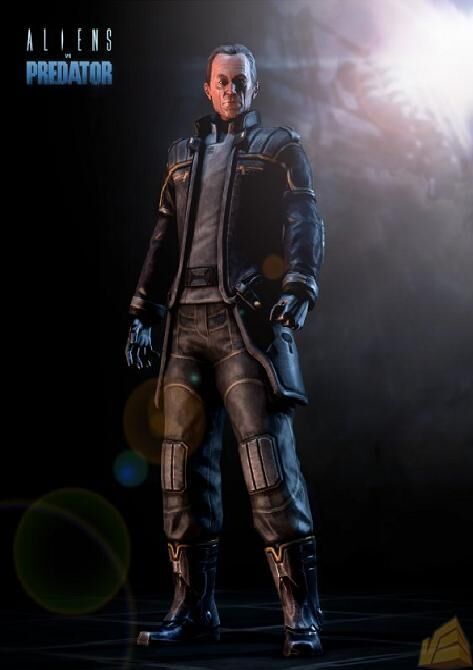 Weyland is a co-founder of the Weyland Yutani Corporation, this is "the company" (Weylan-Yutani) referred to in the earlier "Alien" movie.

Weyland appears as Karl Bishop Weyland owner of Weyland-Yutani in Aliens v Predator 3, who also has a synthetic made to resemble himself. This character was voiced by Lance Henriksen and imaged on Bishop from the films "Aliens" and "Alien³".

A scientist employed by Weyland-Yutani (Michael Bishop) who appears in the film "Alien³" and Aliens: Colonial Marines, is played by Lance Henriksen, who manufactured synthetic clones of himself (also played by Lance Henriksen), these synthetics of himself resemble Charles Bishop Weyland from Alien v Predator (film). This character also appears in the game Aliens: Colonial Marines but aboard the W-Y FTL in the last level and not on Fury 161 as in the film.

The Android 'Bishop' from "Aliens" and "Alien³" is also played by Lance Henriksen as a clone of of either Charles Bishop Weyland or Michael Bishop.


Later appearing aboard a UD4L Cheyenne in the end credits of the Marine campaigns.

Michael Bishop (Bishop II) a scientist employed by Weyland-Yutani who appears in the film "Alien³" and in the game Aliens: Colonial Marines Weyland manufactured synthetics to resemble himself, in the game both Michael Weyland and Bishop are clones of Weyland.

BG386
Tries to kill Rookie in the level Pyramid.


LV426
In the level Stasis Interrupted Weyland appears instead of Michael Weyland on Fury 161 and then later on a W-Y FTL on LV426, here he kills Stone causing Levy to side with Hicks.

In the last level Michael Weyland appears aboard the final W-Y FTL to leave LV426 but in the credits as the level is completed. Here he is questioned by the survivors and explains to them what has occured and as he does O'Neal pulls a gun and threatens Michael Weyland, as the questioning continues Hicks steps in and the gun is discharged shooting and killing Michael Weyland.

LV223
When Weyland appears aboard USCSS Prometheus from hypersleep, he orders the remaining crew back to the Temple where Weyland, Ford and Sheppard are killed by the awakened Terraformer leaving Shaw to escape.

Earth
Weyland appears in the film Alien v Predator as the leader of the expedition to the Whaling Station.


In the films Alien v Predator and Prometheus, Weyland appears as the owner of the Weyland-Yutani Corporation, and in the film Aliens v Predator: Requiem as Ms. Y, the 'Yutani' part of Weyland-Yutani.

Fiorina 'Fury' 161
In the film Alien 3, Bishop who resembles Weyland appears along with Bishop II (as he was known). Bishop II (Michael Bishop) appears at the end to extract the Queen from Ripley under orders from Weyland-Yutani.

In the game Aliens: Colonial Marines Weyland appears instead of Michael Weyland (as he is referred to) on Fury 161, to collect the specimen from Ripley.

BG386
The Weyland who dies is suspected of being a Synthetic, Weyland himself appears at the end credits as his 'Datapad' is being analyzed and transmitted back to base (his 'Datapad' containing the location of the Xenomorphs home world). Appearing on the same craft that the Rookie and other surviving marines use to escape BG386.

Michael Weyland after being shot and killed aboard the W-Y FTL was seen bleeding white blood, this then suggested that the developers were implying that this was the synthetic clone of Weyland who himself appears in the game but in an earlier level.

LV223
David communicates with Weyland while in stasis aboard USCSS Prometheus and later journeys with the crew to the underground Derelict where he is killed by a Terraformer. 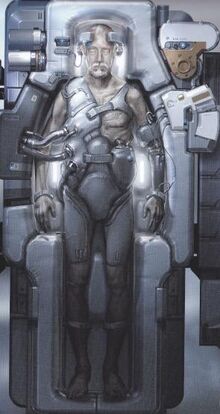 The idea of the LV223 mission was so that the ageing Weyland had a hope in finding a cure from him from the Alien Gods that created life on Earth.

Weyland was equipped with a leg rig, this was a brushed aluminium, light up walking rig with a series of rubber leg straps and strong buckles to attach to the wearer. Made from three separate parts which were linked by large sliding links on the backs of the legs, jointed to allow for movement. A Weyland Corporation logo is positioned on the lower back with four blue lights this would then attach to the back of a spacesuit.

In filming the unit was used as a way of supporting him as he wore a spacesuit, and depicted a leg support capable of off setting the weight of the suit, the terrain and the distance travelled.

The actual film set unit is available for purchase from Prop Store.

Earth
Weyland appears in a WMCD presentation aboard USCSS Prometheus which he introduces himself speaking from his office on Earth.

Project Prometheus
Peter Weyland (October 1, 1990) is born in Mumbai, India to an Oxford-educated Professor of Comparative Mythology and a self-taught engineer.

In Alien v Predator Weyland dies in the underground Pyramid, killed by Celtic as he burns him with a quickly constructed Flame thrower.

Weyland's like the other crew members ice picks were made from hard rubber colored grey with a black handle and a serrated blade. Charles Bishop Weyland (Lance Henriksen) wore a ski coat in the film Alien vs. Predator, a heavy grey coat featuring numerous pockets throughout, with Velcro and zipper closures. The coat had a soft silver interior liner and a detachable fur-lined hood with a tag that read 'Weyland'.

After production Lance Henriksen signed a section of the handle, signing it twice once with his real name on one side and his character's name on the other. The actual film set units are available for purchase from Prop Store. After the film Henriksen signed the coat on the back as well as an autographed production still. (Ice Pick)

Fiorina 'Fury' 161
In the film Alien 3, Bishop is modelled on Michael Weyland (Bishop II) a scientist employed by Weyland-Yutani, who in turn resembles 'Weyland' from Alien v Predator (film).

It is shown in the level Stasis Interrupted in Aliens: Colonial Marines that Weyland was talking to Ripley in the film Alien 3 and not Michael Weyland. After Ripley dies, Hicks and Stone are captured and brought aboard his W-Y FTL and not the USS Patna as in the film which doesn't appear in the game.