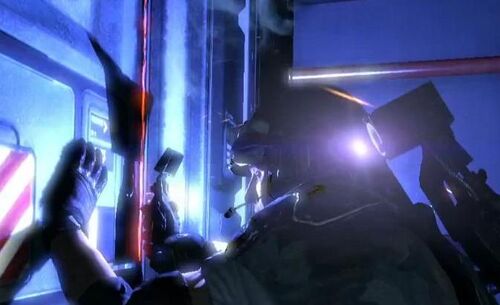 Welders are used by Weyland Personnel and U.S.C.M.s in installations and aboard spacecrafts.

The Welder is used for repairing, sealing and opening doors and bulk heads, it has also been used for constructing and welding barricades.

Made from an alloy, a Welder uses an arc torch for fusing metal together, a flip shield/screen is lowered when welding.

The Welder unit is used on LV426 in Aliens: Infestation, Aliens: Colonial Marines and Aliens (film).

Welders are available in the following;
In the games Aliens: Infestation, Alien: Isolation and Aliens: Colonial Marines welders can be used for sealing and unsealing doors, this will allow access for marines/personnel and prevent Aliens from access.

Aliens: Infestation
A marine wouldn't be able to continue unless he has collected a ME3 hand welder.

Aliens: Infestation
An upgraded welder can be constructed and used, being required later in the game. This upgrade is called a plasma upgrade and the torch Ion Torch.

Aliens: Colonial Marines
Used in both single and multiplayer. The welder forms part of marine equipment and is vital in completing a mission.

Films
A form of welder/laser cutter appears in the films Aliens and Alien 3.

Aliens (film)
Marines and civilians made use of welders in constructing barricades and sealing and opening doors, this effort gave protection from the aliens.

Alien 3 (film)
In their effort to capture the Runner after burning it had failed, the inmates used welders of the few items available to them to seal off doors in an effort of luring it into the furnace, where they would of poured molten lead on it.

Amanda Ripley would make use of a welder for accessing areas sealed off aboard the Sevastopol where power would have been switched off.