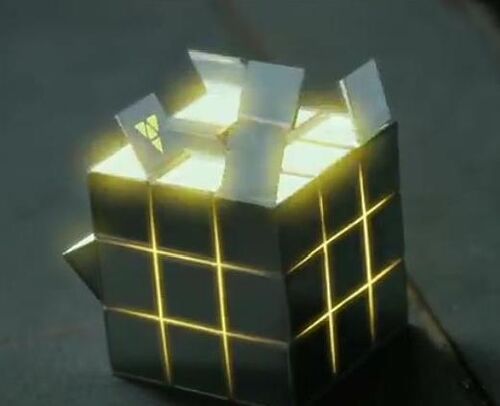 A Weyland Modular Computing Device can pick up live video feeds from a remote receiver and display the information in any environment and in real-time. The WMCD can also recreate a full-surround environment of a specific location from any point in time for academic study or personal entertainment.

A Weyland Modular Computing Device is capable of displaying media coded compostion information in an arc or in the required space.

Used in the Cargo Bay after the crew recovered from stasis on Prometheus' mission to LV223, a Weyland Modular Computing Device was used by Shaw and Holloway to display a projected image of the data acquired showing the star maps in pictorials gathered from many areas around the world and by Vickers to introduce the crew to the importance of their journey.

Weyland Modular Computing Devices are available in the following;
Deployed in the Cargo Bay aboard Prometheus.

For Weyland they started with photos of the actor Guy Pearce then they drew designs in photoshop before they Lifecast him, Colin Shulver blocked out the makeup in clay and moulded the pieces in plaster, while makeup artists Valentina Visintin and Valtor Casotto applied the final pieces on set.

Each artifact was modeled in a glass box taking reference points before adding the graphics of the dates for each.

Coner O'Sullivan created a silicon make-up for Guy Pearce (Weyland) who was 95 and in an office on Mars, for the scene in the cargo bay. Filmed in an office in stereo and blended by visual effects supervisor Jamie Dixon and compositing supervisor Michael Kennedy at Hammerhead as he spoke with the crew, Shaw's speech was produced using strings of LEDs for motion capture for the artifacts and again with Hammerhead developing the graphical display.