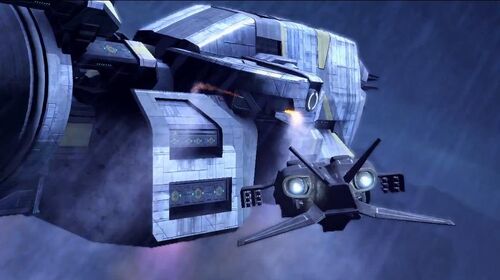 W-Y FTLs are a Weyland-Yutani Faster-Than-Light Starship similiar in the design of the USS Sulaco.

The Resolute appears in the Aliens: Colonial Marines campaign that the survivors board as they escape LV426 finding not only an Alien Queen aboard but also Michael Weyland who had been to Fiorina 'Fury' 161 with an assortment of troops, Weyland Personnel and synthetics to collect the Queen embryo from Ellen Ripley.

Weyland himself is aboard a W-Y FTL called the Resolute in the level Stasis Interrupted, aboard with him is Hicks and Stone who after escaping the Sulaco reached Fury 161 and were captured by PMCs.

In the last level Home, after clearing the cargo bay of the Alien Queen, Cruz, Bishop, Hicks and Winter find Michael Weyland aboard who they interrogate but accidentally kill.

In the level Stasis Interrupted, Stone is killed by Weyland and Levy a Weyland personnel decides to side with Hicks who he releases and then are tasked with escaping via an EEV. A short journey to the surface of LV426 which leaves the EEV in flames but surviving there next task is to reach the communication array in the part built facility not far from the Derelict.

W-Y FTLs only appear in the Aliens: Colonial Marines campaigns. Although these spacecrafts are similiar with the Sulaco they are shorter and are capable of descending and landing on the surface of a planet unlike the Sulaco or Sephora. They are configured with their cargo bays in the aft area near the engines and are lightly armed as they are used for scientific research.

Michael Weyland after being shot and killed aboard the W-Y FTL was seen bleeding white blood, this then suggested that the developers were implying that this was the synthetic clone of Weyland who himself appears in the game but in an earlier level.

It is shown in the level Stasis Interrupted that Weyland was talking to Ripley in the film Alien 3 and not Michael Weyland. After Ripley dies, Hicks and Stone are captured and brought aboard his W-Y FTL and not the USS Patna as in the film Alien 3 which doesn't appear in the game.