Vladimir is a Mercenary aboard ship in the film Prometheus.

Mercenaries are required on Prometheus' voyage to LV223 due to the importance of the voyage. They are equipped with Storm Rifles, Pistols, Shotguns and Flame Throwers.

Mercenaries aboard Prometheus are Vladimir, Jackson, Sheppard and Taplow. 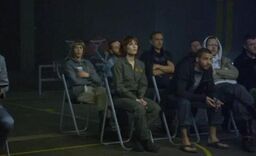 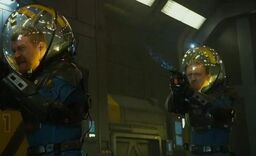 Vladimir as a mercenary during Prometheus' Mission on LV223 is responsible for the security of the craft and personnel, using advanced weapons which fire high velocity bullets.

Vladimir goes as security on the second exploration along with the scientists into the Alien Temple to find Fifield and Millburn, only finding Millburn, Holloway falls ill so they cut their journey short informing Vickers as they return.

Vladimir is in the Cargo Bay when a mutated Fifield returns from the Temple. Fifield now mutated and hardly recognizable attacks Prometheus' mechanics Ray and Wallace killing them very quickly, mercenaries Sheppard and Taplow intervene with a Flame thrower and Pistol only scaring Fifield who scarers around an ATV. Vladimir and Jackson enter both carrying pistols and open fire, once Fifield reappears he sets about killing Taplow even though being shot, while Sheppard jumps in the ATV, Vladimir and Jackson open fire again hitting Fifield several times, still ineffective Vladimir goes for one of the ATV's only to be attacked by Fifield and killed by an axe.
Janek and Chance arrive in the Cargo Bay and finally manage to kill Fifield with Flame throwers, now that Fifield has been subdued by being driven over by the RT all-terrain vehicle.

Sheppard and Jackson later join Weyland as they journey into the Alien Temple, Sheppard remains at the ATV and returns back aboard Prometheus.

Prometheus (film)
Vladimir dies from an attack by Fifield in the Cargo Bay.

Vladimir's character is played by Vladimir 'Furdo' Furdik aboard Prometheus.


Vladimir 'Furdo' Furdik is one of the stunt performers in Prometheus.