Meredith Vickers is a Company Suit aboard ship in the film Prometheus.

Vickers is considered as 'Mission Director' for Prometheus' mission. She is there for insuring the financial interests of Weyland are maintained and that the crew of Prometheus achieve set misson goals on LV223. 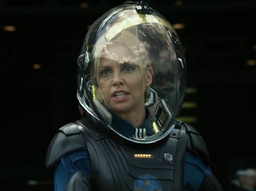 Vickers orders all crew to avoid direct contact with the Engineers if any are found, mainly staying aboard Prometheus while some of the other crew go to explore the Temple as she is there in a command position, giving orders and collating data from the exploring crew. She controls the situation from her suite and the Bridge, where she can track the crew on a Holotab Display Unit and WMCD while they are in the Derelict and Alien Temple.

On the return of Prometheus' crew from the Alien Temple after going to rescue Millburn and Fifield and Holloway falling ill, Vickers is in the Cargo Bay with a Flame thrower, she uses it on Holloway, burning him to death and preventing any pathogens aboard Prometheus.

First uncertain about Shaw's reason about stopping the departing Derelict, Janek, Chance and Ravel set off on a collision course with the craft, while Vickers just before impact uses an Ejection Pod as her means of escape from Prometheus before they collide with the Derelict.


Vickers kills Holloway in the Cargo Bay aboard Prometheus as he returns from the Temple.

Vickers herself dies from the impacting Derelict as she is running away after having used the Ejection Pod for her escape from Prometheus.

It is thought that Vickers could be a synthetic.

Aboard Prometheus, Vickers is dressed in an ice-silver, silk mohair suit, this is a similiar suit that she wears on Earth.

As with all the crew, Vickers' outfit under her space suit is comprised of neoprene, worn under an outer suit, which a helmet and a backpack attaches.

The androids' names in the Alien films follow an alphabetical pattern: in Alien it's Ash, in Aliens and Alien³ it's Bishop, in Alien Resurrectionit's Call and in Prometheus it's David.

Meredith Vickers EC/#9545874308. Peter Weyland's only legitimate child and CEO of Weyland-Yutani on the death of Weyland.