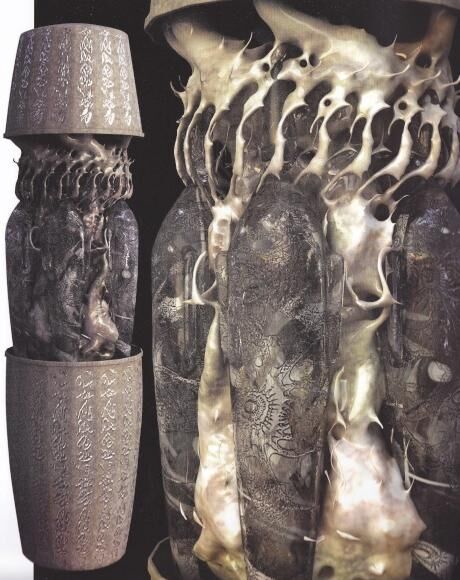 Urns are in use by Terraformers on LV223.

An Urn is a synthetic alloy polymer, polyresin cryo-containment unit for organic stasis holding, these are engraved and stand in columns in the Ampule Room (Cathedral) on LV223. They are used to contain 'black liquid'.

Made from a synthetic alloy polymer, polyresin, an Urn is shaped like a capoeira drum wide at the center narrowing towards the ends, a mechanism contains the contents inside the unit, smaller ampules are contained inside.

An Urn's polyresin cryo-containment unit is used for organic and chemical stasis holding, and can be used on spacecraft and planets.

David takes the contents of one of these Urns back aboard Prometheus for analysis, he uses a sample of the contents on Holloway whilst they share a drink in the Mess Hall, which in turn is passed onto Shaw.

After Millburn and Fifield get stuck in the Alien Temple during the storm, they return into the Ampule Room, were the urns have started oozing a black liquid and reacting with the indigenous species.

The liquid from the urns have now created several Alien Creatures, these Aliens are capable of rapid growth and rejuvenating themselves.

Urns feature in Prometheus (film), they appear in the Derelict's Hibernation Room, this room is full of stacked urns and in the Ampule Room on LV223 were they are set a small distance apart. 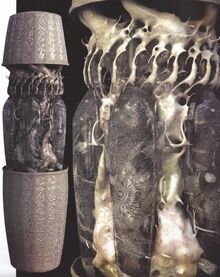 Scripts refer to the urns as having a variety of compositions and sizes, in the Ampule Room (Cathedral) on LV223 they are leathery and in the Derelict's Hibernation Room they were smaller in size.

The Urns that David anaylses in Prometheus' Med Bay are created on set from clay for the film varying in size with some made from foam and plastic. The liquid was contained is specially made glass ampules which linked together and held by latex sheath attachments.

Varying different size biscuit foam urns were made and set in the Ampule Chamber, sizes varied from 18", 22.5" and 30.5" tall. Raku pottery specialist Rob Sollis was recruited to craft the urns which he got inspiration from delicate Roman glass. Created from hard biscuit foam with a resin skin with text etched vertically, each urn was painted in a metallic paint effect incorporating silver, gold, brass and blue colours, then distressed for it's ancient heritage.

Trevor Wood's effects team made practical liquid effects using vibrations from a speaker underneath an urn, using blackened corn starch on the surface which would oscillate under frequency producing a dancing effect of the black liquid.

Genuine Prometheus urns are available for purchase at Prop Store, along with other items.

Prometheus (film)
Prometheus: The Art of the Film