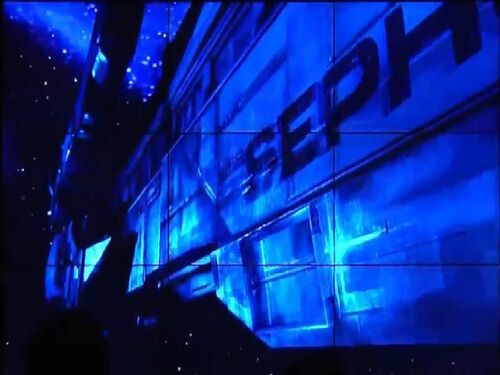 USS Sephora is a troop carrier for the U.S.C.M.'s used by the arriving force of marines in the Aliens: Colonial Marines and Aliens: Infestation campaigns.

Gameplay in Aliens: Colonial Marines starts aboard the USS Sephora in the level Distress, in the second level Battle for Sulaco the Sephora starts to disintegrate and at the end of Sulaco Falls collides with the surface of LV426 together with the USS Sulaco.

Aliens: Colonial Marines
The USS Sephora arrives at LV426 and docks along side the USS Sulaco, connecting the two spacecraft by umbilical passage ways.

In the level Distress, Keyes detonates a grenade destroying one of these umbilicals connecting the two spacecrafts together causing a depressurization and unstablizing both spacecraft. Later in gameplay the Sephora is destroyed eventually colliding with the surface of LV426 along with the Sulaco.

Various
The USS Sephora appears in both the Aliens: Colonial Marines and Aliens: Infestation campaigns along side the USS Sulaco in orbit around LV426.

As the Sephora and Sulaco are similiar craft in the Conestoga Class the Sephora could be the same as the Sulaco having between 4 and 6 decks and between 2 and 4 flight bays.

Aliens: Colonial Marines
In the Aliens: Colonial Marines Collector's Edition an exterior schematic for the Sephora was packaged with the game, this suggested the same number of bays and decks and similiar configuration as the Sulaco. Unique to the Sephora in the game are Service Skiffs which also appear aboard the Sulaco, these are used in the opening sequence and in the level Stasis Interrupted.

Sephora
These are the weapon and area details for the Sephora according to the schematic that was bundled with the collector's edition.

Life Support
Sufficient capsules for up to 90 crew and passengers.

Power Systems
The Primary Power System is a Westinghand A-59 Fusion Reactor with a maximum generating output of 3.6 Terrawatts.

Drive Section
The Sephora has a Dual Drive system for 'faster-than-light' FTL and sublight travel and maneuver.