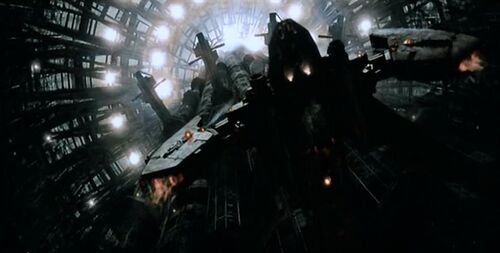 The USM Auriga is a Medical Research Vessel, owned and run by the United Systems Military (U.S.M.). The USM Auriga serves as a Biological Laboratory and Space Transport, it features in the film Alien Resurrection, the Auriga is in orbit around the far side of Pluto and run by General Perez the commanding officer.

Game play is also played aboard the U.S.M. Auriga in the game Alien Resurrection by the crew of the Betty and Ripley a clone.

Alien Resurrection (film)
The crew of the Betty arrive in the docking bay of the Auriga with their cargo of miners in stasis. After being checked for weapons before being allowed aboard, Elgyn meets with Perez who evades any questions as to their use. The crew are given limited access to the spacecraft after the transaction so the crew take a break but Call takes the opportunity of finding and killing Ripley which she ultimate fails to achieve. Later after errors in the research laboratories which escalates in the release of the captive Aliens, Ripley takes the opportunity of escaping as the Aliens attack the crew including her. Later Ripley is in the gym as the crew and Call arrive, due to a misunderstanding USM military arrive shortly afterwards to arrest them, a shoot out occurs leaving the military all dead giving them a chance of escaping before any more personnel arrive. The Aliens continue killing any personnel as the crew make their way towards the Betty.

Various
The crew of the Betty arrive at the USM Auriga aboard the Betty in the film and in Alien Resurrection (video game) gameplay is played by Ripley who interacts with Call, DiStephano and Christie who are already aboard the USM Auriga. As they escape the Aliens in both film and video game the escape pods or Lifeboats are all used by any surviving military and research personnel leaving them Betty for their escape.

The computer system aboard the Auriga is called 'FA/TH/ER' and voiced by Steven Gilborn in both the film and video game.

Alien Resurrection
The levels on Auriga are numbered 1 - 39, with the level 1 as the lowest floor of the spacecraft. Also found on that level are the Cooling Tanks, Kitchens and Freight Elevator, level 1 also connects to the Docking Bay and the Betty.

Other areas of the Auriga are identified by there area names like Mess, Engineering and by sectors A-F, with the barracks in sector F. Alien research (R&D) occurs on levels 7 - 15 with level 15 as the incubating chambers which hold the emerged Aliens. As the Betty's crew board they are informed that levels 7 - 12 are off limits.

This is the configuration of the Auriga from Alien Resurrection, it could suggest there is a similiar format in the game and the levels for both are included.

Alien Resurrection
The game starts as Ripley escapes from the Detention Block and the story continues with Ripley, Call, DiStephano, Christie play different levels through the game. The different areas are played with one character at a time who only interacts at comms as they get orders or directions. The Newborn appears in the level Docking Bay before appearing again aboard the Betty in the level The Betty. The Newborn character is referred to as the Abomination, pass cards are used to access sealed areas instead of breath sprays. The game includes areas that don't appear in the film.

Concept artists for Alien Resurrection consisted of Duncan Brown, Guillaume Camus, Karyn McHale, Mansoor Naim, Saurav Sarkar, Kim Tran and lead designers Paul Crocker and Michael Wilson. The game went through a series of dramatic changes during production. According to a 2007 "Making Of..." article in Edge Magazine, the game started off as a top-down shooter and was well on schedule. The first rehash came once Tomb Raider was released - the game was turned into a 3D shooter featuring the whole original cast. The team pushed this on nearly to completion, but were concerned that it simply wasn't scary. The game finally came together when they demonstrated a claustrophobic first-person view for negotiating vents. Well behind schedule, the team worked long hours to reconstruct the game as a first-person shooter, and finally released it. The opening title sequence and ending movie survived from the first version of the game, but little else.

Alien Resurrection (film)
In the film, Ripley escapes the Detention Block and meets the rest of the crew in the Mess Hall, from there they all continue towards the Betty. Unlike the game keys and breath sprays are used, something Call and Perez use as they access doors. The film included more corridors, gantries and rooms than featured in the game. 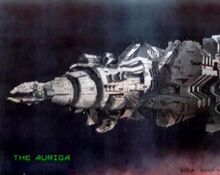 Nigel Phelps initially designed a circular spaceship but Jean-Pierre Jeunet decided that it wouldn't be capable with the initial filming which required a pull back shot from the Auriga. So with only 3 days before final designs needed to be given in for produced, concept artists Jim Martin, Sylvain Despretz, Nigel Phelps and Bill Badalato designed 20-30 different designs before Jean-Pierre Jeunet decided on the final one.

VFI Effects 3D, LA created almost all CGI for the spacecrafts including the Auriga, the Betty and the Lifeboats using matte paintings and green screens. These were then filmed with the miniatures at 60 frames a second and when slowed in post production produced a feel of zero gravity. 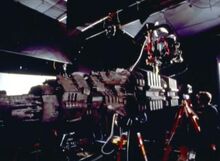 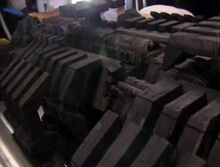 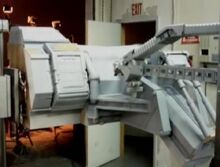 These were then given to Matthew Gratzner miniatures supervisor and Ian Hunter who worked with the art department for seamless shots from models and on screen actors. They created 4' and 10' models for the Betty and a 12' model for the Auriga. Using HGI and miniatures with reference to the films Alien and Aliens for their inspiration for the details, a process called beauty lighting for filming miniatures and blending the images in together with AR process was used requiring several takes. Eric Henry and Pitof visual effects supervisors used miniatures of the spacecrafts as they didn't consider the CGI at the time capable of what was required. Under Darius Khonoji cinematographer for motion capture while filming, paid particular attention to the lighting, using defused and soft lighting given the location of the Auriga, filming with dark light and matte for models against a dark surface. 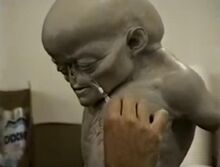 ADI produced silicon models for all the Ripley's in the film Alien Resurrection, using a child photo of her for a model and making a scaled model for Ripley herself. CGI was used for morphing between the two as she aged, each version of Ripley was produced on set, a model was also constructed with Ripley playing as the number 7 clone. This was also made from silicon and filmed similiar as Ash from Alien. In filming two puppeteers controlled the body and Ripley as she spoke, as Ripley 8 entered she would use a flame thrower incinerating the different versions of herself.

As Ripley descends towards the Queen she interacts in a hive which was called the Viper Pit, a large scale set 20' x 20' made from silicon and Alien parts, one of the largest Alec Gills and Tom Woodrow Jr. created with Tom Woodrow Jr. playing as one of the Aliens on set. As many as 20-25 puppeteers operated the animatronics during filming with some just moving parts keeping the set fluid. From her Ripley is lower by a lift and drawn towards the Queen in her Lair moments before the Newborn is born. 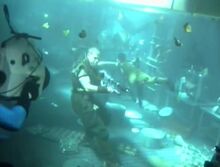 The underwater scene was filmed at stage 16 at Fox Studios LA due to limitations of other locations. A 100' x 50' x 12' deep water filled stage area was built for the flooded kitchen area and the cooling towers, a further 9' deep tank which had the ladder stage was built above it, this area included the elevator shaft were they emerged and struggled to get through the eggs. A number of divers were used giving oxygen for the actors when filming, 10 training sessions were completed before two and a half weeks of training on stage.

Sigourney Weaver made the behind-the-back basketball shot in the gum successfully after two weeks of basketball practice, tutored by a basketball coach. Her rate during that two weeks was about one shot in six.

Although it appeared that the cast spend most of the time wandering up and down endless spaceship corridors, in reality there were only two built for the film with a separate rail system as they unloaded the stasis units which was filmed with miniatures and against a green screen.

The film Alien Resurrection is set after the film Alien 3, some 200 years after Ellen Ripley dies at the Class C Work Correctional Unit on Fiorina 'Fury' 161.