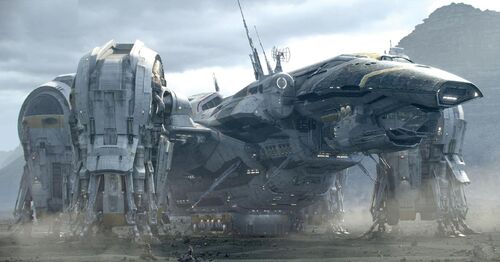 USCSS Prometheus is a spacecraft in service for Weyland-Yutani, it is the spacecraft that transports the crew to LV223 in the film 'Prometheus'.

A Weyland-Yutani built craft, the spacecraft is a heavy exploration and prospecting vessel with one Class D Crew Escape Module, eight Class A individual crew ejection pods and four vectoring hybrid drive engines, the multi-decked transport is equipped with Stasis, Med Labs, Research Labs, a Flight Bay and a Loading Bay housing ATV's and Quad Tracks. The craft is fitted with multiply intergalactic communication antennas and is capable of interstellar planetary flight, life support and capable of landing directly on planets.

Prometheus features Crew Rooms', there is one for each crew member including David, with Shaw's, David's, Holloway's and Vicker's rooms featuring in the film. Other rooms are a Locker Room, Ready Room, Shower Room, Sick Bay, Mess Hall, Control Room, Engine Room, Passenger Room, Hyper Sleep Barracks, a Laboratory and a Cargo Bay that can be lowered, this links to the upper floors by lifts which are connected to each level,

Prometheus was one of the first ever spacecraft to be fitted with FTL travel, FTI Tech, a master class star freighter launched on the 50th anniversary of Weyland Corporation, capable of travelling 40 light years in less than 5 years and powered by anti-matter.

The crew of Prometheus set off on their journey in stasis due to the duration of their mission, when they arrive on LV223 they descend to the surface and choose a landing area near a row of Alien Temples.

Prometheus during flight has all engines facing backwards, because USCSS Prometheus can land on the surface of planets, these engines as the craft is landing rotate downwards and landing struts emerge from the engine pods supporting the weight of the craft. Once landed the Cargo Bay lowers and a huge bay door opens allowing access for the Quad Tracks and ATVs that the crew use on the surface.

While on the surface Prometheus acts as a base, communicating with Earth and the exploring crew and shielding them from the storms that can sweep across the surface. Lavishly equipped for all the crew's needs while on the surface, including a crew's room for each crew member, a Mess Hall, a Med Bay, Labs and various other rooms that the crew use.

Setting off taking the NR6's and the RT01 the crew explore the Alien Temple, these they return at the end of each journey allowing time for servicing by the Mechanics who are stationed there for these tasks.

After their last journey into the Temple when Shaw returns from the Derelict, Janek sets a collision course with the spacecraft, Prometheus impacts in a ball of flames causing the Derelict to descend back to the surface. Just prior to the collision Vickers uses an Ejection Pod, escaping and landing the craft near to where the Derelict lands. The descending Derelict then rolls along the surface and as it does crushes a fleeing Vickers who couldn't escape it's path quickly enough and narrowly misses Shaw as it falls on it's side.

'Prometheus' is the name of the spacecraft used to send the crew to LV223.


Weyland appears aboard Prometheus after David returns from the Derelict informing him while in stasis of the find, they then travel into the Temple. Weyland makes it 19 crew although in the flight approaching LV223 it is stated that there are 17 crew.

Prometheus crashes into the exhaust ports of the Derelict to stop it destroying Earth, stranding the surviving crew on LV223.

The Ejection Pod is a Class A individual crew ejection pod and there are three of these on each side, and two aft.

The Escape Craft situated to the rear is a Class D Crew Escape Module capable of automatic medium-range navigation and landing.

The remaining crew Janek, Chance, Ravel, James Embree, Jackson and Taplow are though to die aboard Prometheus.


In concepts and early scripts the spacecraft used for the crew's journey was to be the USCSS Megellan, a similiar spacecraft to the USCSS Prometheus. The Bridge deck was of a similiar design with a platform for Janek's controls by the window up front and there would be four Ejection Pods on each side with a total of eight flight chairs.

Julian Caldow, Ben Proctor and Andrew Palmer designed the concepts for the different areas of Prometheus which were varied by production but kept their basic design from the USCSS Megellan and for the doors, corridors and labs.

The Prometheus' bridge was built on a stage at Pinewood studios with a green screen backdrop, the cargo bay, airlock and one landing foot were built on the Pinewood backlot surrounded by a huge 60ft high circular green screen backed by shipping containers. The surface and walls were blended from different filming and added to the filming in Iceland for the spacecraft on the surface.

Coner O'Sullivan created a silicon make-up for Guy Pearce (Weyland) who was 95 and in an office on Mars, for the scene in the cargo bay. Filmed in an office in stereo and blended by visual effects supervisor Jamie Dixon and compositing supervisor Michael Kennedy at Hammerhead as he spoke with the crew, Shaw's speech was produced using strings of LEDs for motion capture for the artifacts and again with Hammerhead developing the graphical display.

Perspex display screens that were dotted around the spacecraft used for controlling and operating items like doors were made from an etched acrylic and powered by battery.

Flame thrower effects were achieved by using both self-contained pyro-technic rigs and minimal digital enhancements, these included the actors Holloway and Fifield being burnt.

Plowman Craven are connected with MPC in designing and producing environments and visual effects for the surface of LV223 producing CGI images bringing them to life and adding the spacecraft Prometheus in it's approach towards the surface. MPC (Moving Picture Company) worked with Scott and Stammers on action sequences, the space travel shots and shots of the planet's atmosphere with cloud formations and electrical storms adding Prometheus' landing sequence, including the crash of the USCSS Prometheus and the Derelict as it sets off for Earth.

Ten companies worked on the film involving the visual FX which had visual displays giving information for the crew, the input and interfaces (UIs) were produced by a further two companies Territory Studios and Inventing Interactive who worked on projecting in real time medical interfaces in the lab, diagnostic screens and other generic screens aboard Prometheus' bridge.

The dust storm outside the USCSS Prometheus featured practical effects achieved by using large wind fans and particulates with some being filming shot against green screens. Raising Sun Pictures added extra digital particulates in post production and balanced them for stereo 3D.

The crew's mission in Prometheus takes 21/2 years to reach LV223.