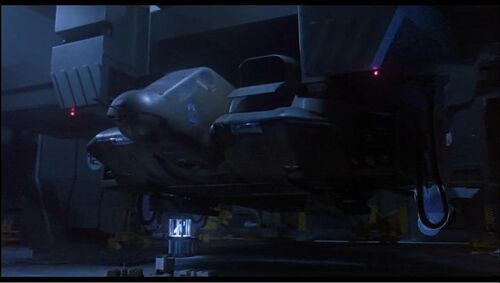 UD4L Cheyennes are troop dropships for the U.S.C.M.s, a UD4L Cheyenne Dropship first appeared in the film Aliens, used for a combat drop to the surface of LV426.

The U.S.C.M. UD4L Cheyenne Dropships are larger than the U.S.C.M.s Dropships with some equipped with life support and stasis, capable of transferring troops and equipment to the surface and used in combat drops on BG386, LV426 and LV1201.

Appearances in the following;
BG386
The level Pyramid and beginning and end credits for the marines' campaign in singleplayer in the game Aliens v Predator 3


Used for bringing and evacuating the surviving Marines and a Synthetic from BG386 in the game Aliens v Predator 3.


Aliens (film)
Two UD4L Cheyenne Dropships were used in the film Aliens to bring Ripley, Bishop and USCMs from orbit to and from the surface of LV426.

Aliens: Colonial Marines
In the level Stasis Interrupted, multiple UD4L Dropships are used to construct the Weyland-Yutani Facility on the surface of LV426 between Hadley's Hope and the Derelict. These Dropships have been modified, were a winch replaced the cargo bay and used for ferrying pre-built modules.

Multiple Dropships appear in the game starting in the level Distress, one piloted by Reid. Reid later appears in the level so O'Neil and Winter could escape but because the cargo bay doors stay locked they needed to find a different route. Reid later again appears as the Dropship pilot rescuing the crew in other levels, including their final escape from LV426 landing in the cargo bay of the last W-Y FTL spacecraft. Finally Cruz uses the Dropship with the Queen attached, flying off the cargo bay and saving the crew.


UD4L Cheyennes appears in both Alien and Predator levels in the game AVP: Evolution. These would target a character as soon as they are seen and should be avoided.


Some UD4L Cheyenne Dropships in Aliens v Predator 3 are equipped with stasis and capable of longer space journeys while others are used for carrying troops and APCs.

Aliens: Colonial Marines
Multiple Dropships appear in the game, one is flown by Reid while others construct or patrol around the installations on the surface of LV426.

Aliens (film)
Two UD4L Cheyenne dropships feature in the film. The first crashes on the surface during evac which leaves Bishop as the only one of the team able to remote pilot the second off the Sulaco.

Concept artist Syd Mead drew designs for the Dropships and Sulaco which were edited by Ron Cobb, with James Cameron designing the Alien Queen, Power Loader and Sulaco and Graham Langridge the USS Sulaco's schematics. 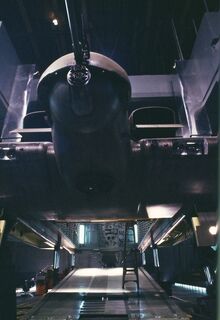 A number of Dropships were produced in the filming of Aliens, these included a number of 2-3' models, a 7' model and a 12' model. In filming the large 12' Dropship can be seen on the cargo bay as the crew are first briefed by Gorman and then during prep, using a number of techniques to appear larger. A separate ramp, stairs, cockpit and underside for weapon loading and as the Queen emerges was constructed, loading, flight and landing used scaled miniatures. 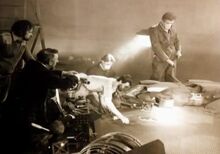 A one fifth scaled model remote controlled miniature was filmed for the APC loading onto a UD4L Cheyenne, along the surface and at the Atmosphere Processor. A one tenth scale model with APC inside the dropship was filmed just as the UD4L Cheyenne was approaching and touching down at Hadley's Hope. The 7' long model was being guided and controlled by cables and a smaller 2' held by smaller cables for approach to the surface, on the surface scene and some others a variation of miniatures were used in filming.

A separate simpler model was used for impact of the Dropship after dropship pilot Corporal Collette Ferro is killed by the Alien aboard ship. This was filmed whilst on a cable with a rubber cord pulling it along to give it it's acceleration as it impacted, then allowed to bounce around on the surface. Filmed at five times normal speed with millisecond charges being detonated as it approached. John Richardson special effect supervisor for Aliens production pyrotechnics was in charge of these fx, staging the explosions and fire for the dropships, APC and Atmosphere Processor scenes.

Ron Cobb designed the art for the Dropships from a script idea that the Colonial Marines were bug hunters and the Xenomorphs were the bugs. So using an eagle with boots on carrying a machine gun painted inside a red circle the slogan 'We Endanger Species ', naming the spacecraft Bug Stomper, also adding this design on jackets worn by the crew. The second Dropship was named Smart Ass, also with an eagle and the slogan 'We Aim By P.F.M', dressed in boots and carrying a large gun on a blue circle.


Dropships appears in the book with the description of the UD4L Cheyenne Dropship from the film Aliens;

'The UD-4L Cheyenne Dropship is a multi-functional combat utility craft primarily designed to transport troops and materials from an orbiting craft to a terrestrial troop site. It is also heavily armed and armored, and operates as air support for ground troops.

The Cheyenne has proven a popular craft amongst pilots. It consistently preforms above it's design specs and its versatility allows the pilot to adapt to the unpredictability of combat as well as safely handle ship-to-surface transports.'