Terraformer's Biomask and skeletal bio mechanical suit features a hose like trunk which connects to the cannon mechanism in front of the seat and the suit becomes part of the chair in the Orrery inside the Derelict.

Made from a nano-morphing polyresin a Biomask is worn by a Terraformer and equipped with environmental systems designed to keep the wearer comfortable, these Biomasks fit with a Terraformer's Bio Space Suit and when seated in the Orrery of the Derelict the space suit and mask fuse together with the chair.

A Bio Space Suit and Biomask are used as an integrated flight navigation and space travel in Prometheus (film).

Various
Alien (film) and Prometheus (film) features Terraformers wearing Biomasks and Bio Space Suits featuring the same nano-morphing polyresin construction. These suits and masks form once a Terraformer is seated in the Pilot's Chair, the Terraformers are also able to continue wearing them even when they are no longer seated.

The Terraformers Biomask and Bio spacesuit act as a life preserver ageing the Terraformer little, and preserving organic tissue even after being dead for many years.

Jockeys in Prometheus (film) are referred to as Engineers. 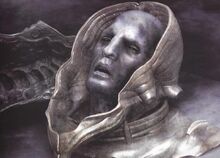 Scripts and early concepts showed the Terraformers as much larger and so proportionaly Biomasks were larger, they also showed that these aliens were 11-14 foot tall but by production were reduced to 8 foot so actors could take their role.

Prosthetics were produced by Lifecast and on set by Gustav Hoegen and his team with MPC working on VFX for some small creature sequences and prosthetic enhancements, when the crew got infected in the film. 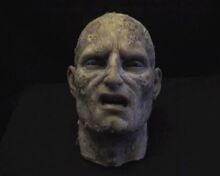 Part produced by VFX, with models by Gustav Hoegen senior animatronic designer on Prometheus who designed and made David's animatronic head, the Terraformer's decapitated head and a Hammerpede model.

The Terraformer's animatronic head was produced with moving facial and scalp features with the filming being produced in one of Prometheus' medical labs. Neal Scanlan's team created the animatronic head which could be controlled, using casting from organic material, Gustav Hoegen mechanized the head with Coner O'Sullivan's team adding the silicon skin, Martin Hill at Weta Digital reproduced the head digitally adding blood and skin bursts.

After awakening brain neurons the animatronic head was seen to explode as it was being decontaminating, Coner O'Sullivan made a wax head which would could finally explode with added pyrotechnics from Trevor Wood.

Terraformer's Biomasks first appeared in the film Alien aboard the Derelict, later appearing in the sequel to Alien (Prometheus).