A Terraformer is an Alien from LV223, aboard the Terraformers' Craft and the Derelict in Prometheus (film). These Terraformers also called Engineers, are considered as pilots, collectors of species from different planets and terraformers.

Terraformer's Biomask and Bio space suit similiar with a Jockey from Alien (film).

Terraformers from LV223 have been to Earth before at an unspecified time, and while on Earth they left messages in the form of pictorial representations, which had been scattered in many locations. Hidden in and amongst the images were clues so a suitably advanced culture would be capable of deciphering, a message giving directions to another world.

As Weyland, Ford, David, Shaw and Jackson journey into the Alien Temple and Derelict they awaken the Last Terraformer who sets about killing them all except Shaw, he then starts the Derelict, setting a course for Earth. After Shaw returns, the crew of Prometheus collides with the launching Derelict sending it back to the surface, the Terraformer unharmed sets off after Shaw catching up with her in the Escape Craft. Later in the Escape Craft a squid like monster which was removed from Shaw in a MedPod, grabs and impregnates the Engineer laying an Alien Egg in him which later erupts from his chest, this Alien resembles a 'Alien' from other Alien films and is called a Deacon. 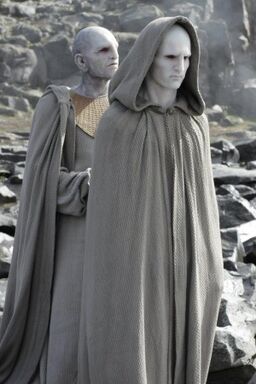 Alien Gods' Terraformers are similiar to the Jockey in the film Alien once they are wearing their Terraformer's Biomask and Bio space suit and similiar with Jockeys appearing in the games Aliens: Infestation and Aliens: A Comic Book Adventure.

There are three Engineers in Prometheus; Last, Ghost and Sacrifice they are played by;
Ian Whyte as the Last Engineer.
John Lebar as the Ghost Engineer.
Daniel James as the Sacrifice Engineer.


The three Terraformers that feature, interact at different stages through the film:

The Sacrifice gives up his life so life can start, by consuming some of the black liquid from the Urns. This liquid dissolves and reduces the Terraformer into DNA and other constituent parts and although not mentioned in the film it is assumed that this act starts all life on Earth.

The Ghost appears as a Holo integrated message, displaying a number of Terraformers running.

Elders are also amongst many Terraformers when the Sacrifice gives up his life, they leave before he sacrifices himself.

Neville Page conceptual artist on Prometheus designed the small and adult Trilobites, Deacon and Engineers designs that were later used in the film with Neal Scanlan's studio creating the creatures on set with Richard Stammers visual effect supervisor for Prometheus. Concepts show Terraformers to be between 11-14 foot tall but by production were reduced to 8 foot so actors could take their role. 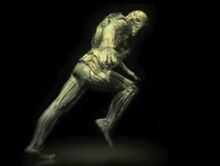 Fuel VFX were tasked with the Holo Map, holographic Engineers and control desk effects inside the Derelict's Orrery.

When David tries activating the controls of the Derelict they activate a hologram and Engineers appear switching on the Derelict's controls and setting a flight course and a Holo Map with destination appears. To achieve this a 'deep image' toolset was used to successfully allow artists to adjust and manipulate specific areas of the Orrery in isolation. This negated the need to redo expensive complete renders when minor changes were requested.

Each area and composition of the Derelict's Orrery could be added or subtracted, John Lebar who played the Ghost Engineer was filmed in the areas where the Ghost Engineers were to be and his image was then removed and replaced for the CGI scans which used variations of point cloud, scanline, frontal projection, dot particles and data patterns creating the effect of a decomposing film. Centroid Motion Capture, captured the reference points of the running Engineers and Fuel VFX used the same techniques adding a wrapping effect as they ran through the actor Holloway.

Vladimir acted as the ghost engineer wearing strings of LEDs which Fuel created translucent glowing forms, added with motion capture of Ian Whyte Fuel VFX supervisor Johannes Saarnes was able to build a very detailed engineer model, these would be able to interact with the surfaces of the Temple and the actors. 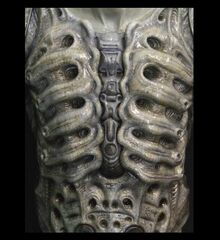 Lifecast made prosthetics including a neck for David attached to David's animatronic head (made by Gustav Hoegen senior animatronic designer on Prometheus) after he had been decapitated and various Engineer's prosthetics and body parts, makeup and animatronics.

Centroid Motion Capture, located at Shepperton Studios and Pinewood Studios worked on the Engineers hologram scene with MPC and Fuel VFX. The running Engineers in the sequence as the crew where in the tunnels of the Temple were motion captured from reference points which were then simulated by computers, this for the crew explained who they were and what they looked like, this scene then lead them eventually to the prosthetic pile of dead Engineers explaining their fate.

Weta Digital in the film Prometheus added the disintegrating effects for the Engineer sacrifice and a Pilot's Chair rising and the Engineer morphing in his seat.

Coner O'Sullivan's team produced 10 full body cast prosthetics for the engineers, this included the Elders at the beginning of the film, as these actors didn't interact with the crew they weren't as tall as Ian Whyte, so actors Daniel James played the sacrificial engineer and Paddy O'Kane the elder. From here Weta Digital produced digital effects for the decaying sequence.

Luke Fisher sculpted the engineer's flight suits for both the actor and a in maquette form, with Scanlan's team creating pressure suits for actors and rigid suited engineers as set dressing, a team of twenty created seventy engineers in urethane foam for the pile of dead bodies as the engineers fled the infection in the Temple.

For the Deacon's birth a hollow dummy of the dead Engineer was created and produced on set and filled with internal organs and a puppet of the Deacon which was compressed in a 3' diameter latex embryonic sac. The Engineer's dummy was operated from beneath the set, puppeteers controlled the creatures so it appeared to convulse before the Deacon erupted and fell on the floor. In this sequence, the Deacon was a combination of a rod puppet with digital enhancement (both lighting and FX) and a completely CGI model, Paul Butterworth Visual effect supervisor Fuel VFX.

Where the Terraformer is grabbed by the adult Trilobite a combination of CGI and large animatronic model was positioned so as to seem like the Terraformer was held by the Trilobite, a scene which required the actor to play his role and then CGI took over completing the more difficult scenes.

LV-223 in situated in the Zeta 2 Reticuli system the same as LV426 in the films Alien and Aliens.