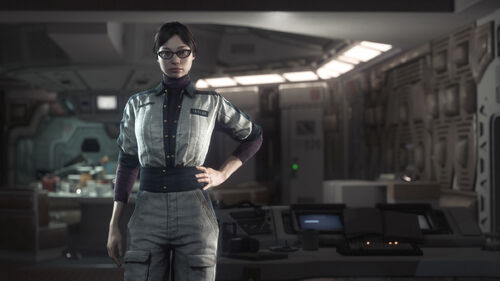 Taylor is a Weyland-Yutani employee in the game Alien: Isolation.

Appearances in the following;
Alien: Isolation

Wears Weyland-Yutani a jumpsuit with a purple coloured blouse.

Taylor only appears in the game Alien: Isolation. Taylor is voiced by Emerald O'Hanrahan.

Early designs for the characters and game drew a lot of ideas from Rob Cobb's early designs of the crew and Nostromo in the film Alien. Spacesuit designs followed directly from the film with concepts trying new colours for the uniforms, later in pre game a silver colour is used, this follows for the crew uniforms as most crew ended with jumpsuits including the synthetics. Taylor wears a jumpsuit and blouse in both concepts and in game which were coloured white with blue in concepts, in game her uniform is a silver colour. In the game Alien: Isolation the uniform is issued by the Weyland-Yutani company who Taylor is employed by. In game Taylor's jacket has a company logo on the shoulder,a Weyland-Yutani logo and her name tag. Other crew members also have a similiar colour uniform but different from concepts with company logos.

Capturing the real life images and faces of the cast The Creative Assembly used real life actors that were mapped by facial capture techniques with further FX added so giving the cast the required expressions. This was completed in April 2014 and a video was released called 'Creating the cast' detailing production processes in completing the characters. Further foley and sound editorials for the game had been completed at Glen Gathard based at Shepperton Studios in Theatre 2 by May 2014. This included the characters interactions in game, like foot steps and breathing and crew interacts like doors opening and reactions to the Alien and synthetics.

During the game it is Amanda which a player plays as, Taylor and the other crew are separated as they EVA.