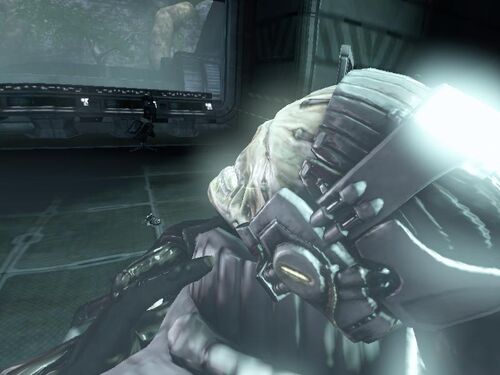 Synthetic combats are synthetics on BG386 in the game Aliens v Predator 3.

Synthetics are polymer mechanoids with a synthetic alloy endoskeleton. These Synthetics are constructed for service on BG386 by Weyland-Yutani, due to their abilities they are suited for military and guard duty.

Synthetics are used in other locations like LV412 where they are referred to as Androids and on LV1201 and are called Combat Synthetics, these are also under control by Weyland-Yutani.

LV412
Found in most maps in the game AVP: Evolution. Combat synthetics are equipped with flame throwers, knives and shotguns with some carrying combat shields.

BG386
Found on all singleplayer maps in the Aliens v Predator 3 campaigns.

Alien: Isolation
After the evacuation and then the infestation of the deep space station Sevastopol some synthetics with other crew members remained aboard. The synthetics have become hostile agains all humans and are a threat to both Amanda Ripley and the other crew of the Torrens.

LV426
The combat androids don't appear on the scanners for marines, these androids appear in all levels in the game including aboard the Sulaco. 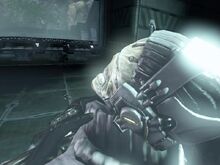 These synthetics can be found in Rookie's, Dark's and Number 6's single player maps in Aliens v Predator 3.

LV1201
Referred to as combat synthetics in the game, they are invisible for the alien as produce no pheromones and only visable for a predator in thermal vision mode.

Alien: Isolation
They are fought best by using emp mines which are collected at certain locations throught the space station but other weapons can be as useful like the flame thrower, explosives, pistol and other improvised tools.

They appear very much like any other synthetic or android, they are machine like and emotionless and would continue the attack against a player. Certain tools brings the Alien in the level and because they are slow, hiding means that they are attacked. 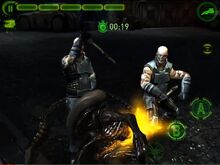 In game a number of synthetics called Androids appear along with the Combat Androids. These are lightly armed and mostly equipped with knives and machetes with some carrying combat shields. In the game they appear in multiple areas and levels about the installations on the surface for both Alien and Predator gameplay. Later they are selectable in the battle editor along with all other enemies that appear in game. This enemy is easily killed directly or by using a quick combo.