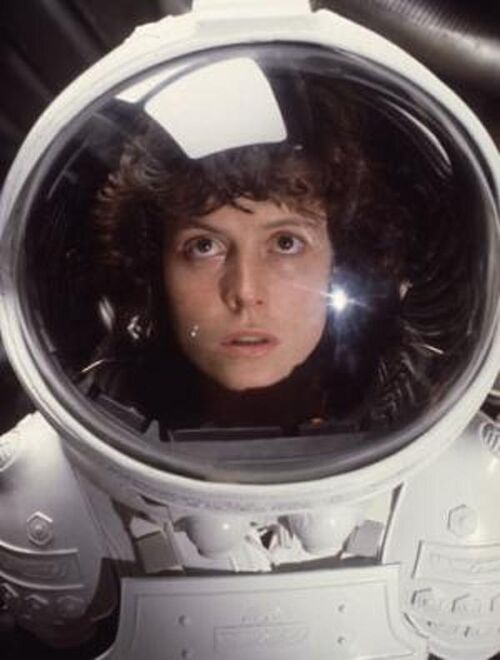 Space Suits are use by Weyland Personnel and Mercenaries.

A Space Suit is a extra-vehicular activity (EVA) garment is used for low pressure and atmosphere conditions, these are also called compression suits or pressure suits.

Made from a synthetic alloy kevlar composite, a Space Suit is worn by a marine and equipped with environmental systems designed to keep the wearer comfortable. 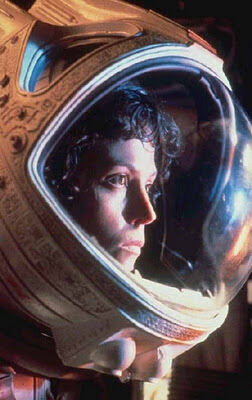 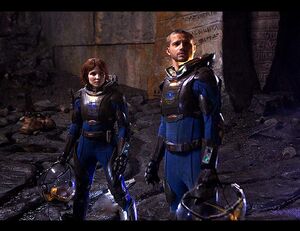 Space Suits are available in the following; 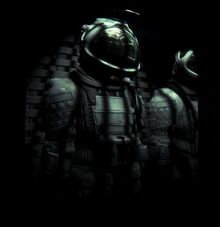 Spacesuits are used by the team in the game so they can EVA between the Torrens and the Sevastopol as contact between the two spacecrafts is unavailable.

Alien (film)
The spacesuits in the film Alien were created by John Mollo, using the Samurai Warrior of ancient Japan as inspiration and the input of French comic artist Moebius. Moebius heavy and bulky design had already featured in his earlier comic book work.

John Hurt's spacesuit had yellow markings on the costume while Veronica Cartwright had blue and Tom Skerritt red. Of the two full size costumes made for John Hurt, one was worn by him as he entered the Derelict while a different suit with a slightly different configuration could be seen hanging in the Nostromo later in the film. 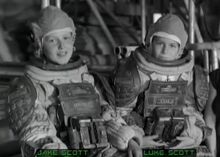 Spacesuits for the film Alien were made industrial and mechanical following the use of the spacecraft Nostromo and it's purpose, spacesuits worn by the crew as they explored the Derelict spacecraft were clad in extra body armour around the shoulders and chest and equipped with larger than normal helmets, the large helmets an idea of Ridleys allowed the concept and filming of the face hugger's attachment and penetration of the face screen which would then attach itself to the actor's face.

Although Nostromo's set pieces were constructed on set like the landing legs, Ridley Scott still did not think that they looked large enough, so he had his two sons and the son of one of the cameramen stand in for the regular actors, wearing smaller space suits to make the set pieces seem larger. Filming them in the spacesuits involved them near the Nostromo, walking along the surface and as they entered the Derelict. Problems with the spacesuits saw them redesigned for improved air circulation and movability. The actors apparently hated the impractical design of the costume because their movements were greatly restricted and the suits had no ventilation.

The spacesuit Ripley gets into aboard the Narcissus had a different design and was made more light weight and white in colour but still retaining the large helmet similiar with the Nostromo's spacesuits.

The actual film set unit is available for purchase from Prop Store. The costume remains in its original film used condition with the exception of the back pack, the wrist guards and the “Kane” name badge to the chest. All these components have been replaced with a painstakingly accurate replicas sourced from original reference.


In Prometheus (film) a Space Suit is known as a Chrysler Suit, these are significantly upgraded space suits which includes a variety of Weyland patented features, such as cadium exo-skeleton, info display with mission details, vitals and environmental conditions.
These are available in a varity of colours with helmet displaying bio/atmosphere stats and controls on the wrist. 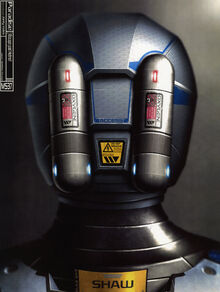 Janty Yates as Costume Designer had four months designing and making all the costumes. Pumps for breathing in helmets had been installed this would also stop condensation. 11 working monitors were created inside the helmets avoiding a costly CGI process, with a massive network of batteries as a power source. With the addition of monitors working cameras were put on the crew's helmets and feeds linked to screens aboard Prometheus.

Prometheus production featured more than 100 astronaut helmets made by CMA Moldform Erdington, UK. A company who specialize in artwork and modeling created the fully functioning helmets with FB-FX Ltd producing spacesuits and life supports units for the crew. Helmets featured life sensors, intercoms and HUD giving a link with Prometheus, life support and warning signs. These were worn by the crew as they travelled around LV223, as they found that there was a breathable atmosphere inside the Alien Temples they removed them and continued without them and as they entered the Derelict.

Oxygen Canisters were made for and fitted into the spacesuits which were also held aboard the Escape Craft and RT01 ATV. Field analysis and med kits carried by the crew as they journeyed into the Temple and other props for the sets were also produced on set.

Josie Pledge as part of Prometheus' set costume fitting and design was a cutter for crew's spacesuits, like for Vickers aboard Prometheus who was dressed in an ice-silver, silk mohair suit.

Emma Taylor as part of Prometheus' set costume fitting and design was the neoprene costume maker for the crew's spacesuits. As with all the crew, Vickers' outfit under her space suit was comprised of neoprene and worn under an outer suit a helmet and a backpack attached and were produced by FB-FX Ltd.

In the alternative Fifield from Martin Rezard concepts and sculpting of the mutated Fifield Weta Digital generated a digital Fifield with elongated limbs and a mutated head resembling that of Sean Harris. As the design evolved, Weta made the inner head more visible so it could articulate with facial expressions and clothed it in a simulation of Fifield's spacesuit torn and covered in oil, distorting and extending the limbs with a capability of walking on his knuckles. 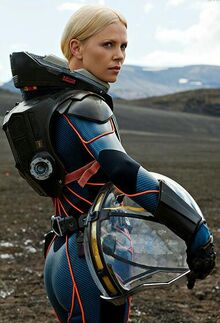 Doug Hemphill and Ron Bartlett were part of the post-production team responsible for combining the film’s dialog, music and sound effects. Microphones were placed inside the helmets to record dialog. Due to a fan for breathing and cooling, an impulse response of the interior was used to help match newly recorded dialog with the original production sound minimizing interior noise. This sampled was achieved by placing a speaker inside and recording the acoustics of the helmets.