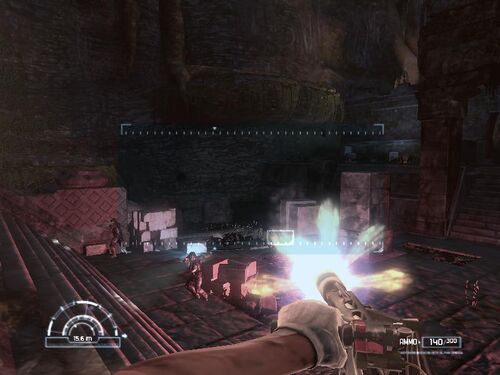 A M56 Smart Gun variant was first deployed by U.S.C.M.s on LV426 in the film Aliens.
This weapon was around 1.1m - 1.2m in lenght and 0.4m - 0.5m wide, it required an attachment that strapped to the carrying marine. The purpose was to produce a balanced weapon capable of being positioned quickly in any direction. Similiar to the newer Smart Guns it had a high rate of fire (RPM) and each marine could carry upwards of 500 rounds.

M59/ Smart Guns are in most cases deployed in military tactical maneuvers to sweep and flank an enemies' position. These can also be deployed as defensive weapons and in the M59/B Smart Gun versions have built in self-targeting detectors.

An attachment for the M59/B Smart Guns, these detectors are capable of detecting all species in a 20m - 30m arc about the front of the gun. Similiar to a sentry gun's field of tracking, little or no delay and a visual HUD of any threat. The M59/B Smart Guns have 2 modes of fire, 'targeted' and 'burst'. 'Targeted' the HUD tracks targets on the display allowing the operator to decide what a target is and whether to open fire, secondly in 'burst' an operator can open fire on any target in range any field of fire. In 'burst' accuracy and affectiveness is reduced but rate of fire is increased. 'Targeted' fire is targeted at the HUD target, and will continue firing at that target until the operator repositions the gun, the target if disposed of or the target leaves the field of fire.

Smart Guns are available in the following;
Aliens (film)
In the film both Vasquez and Drake are equipped with smart guns, Vasquez ties a red bandana around her gun and has added the word 'Adios' which also appears later in the game Aliens: Colonial Marines.

Smart guns have no upgradability in game and have set locations were they can be collected. In singleplayer these are favorable in the corridors and walkways for both aboard the USS Sulaco and on the surface of LV426 like Hadley's Hope. In multiplayer using the smart gun is a tactical choice and best equipped when the number of aliens have increased.

Weapons used by the space marines were constructed from real fully functional weapons. Armourers used guns they found to be the most reliable when firing blanks and those which looked futuristic. Pulse Rifles were created from a Thompson SMG with an attached forend off a Franchi SPAS-12 shotgun and a Remington 12 Gauge Model 870P receiver with barrel. The Smart Guns carried by Vasquez and Drake were designed around a German MG-42 machine gun and were maneuvered with a steadicam-like harness, some parts were made from old motorcycle parts.

In filming weapons only fired plastic bullets similiar with air-shots with the FX being added in post production for both sound and muzzle effect.

Effectively using the guns in just 2 scenes, as they descended towards the colonists in the Atmosphere Processor and in Operations as they battled the advancing aliens after they bypassed the barricades.

Aliens: Infestation
A M56A2 smart gun is available for players once collected, capable of tracking a target with ammo collected in game.