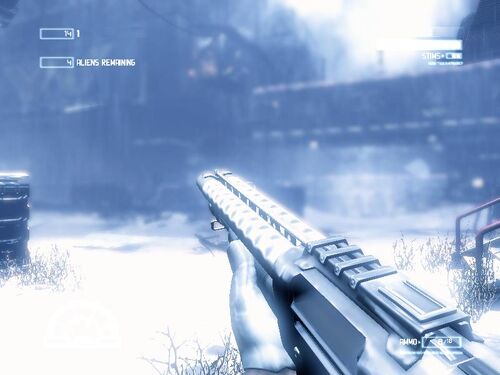 ZX76 shotguns are in service with the U.S.C.M.s.

The ZX76 shotgun is used with the U.S.C.M.s on BG386, a double barrel shotgun firing standard 12-gauge rounds. A choice of weapon by the experienced marine in combat and defense. In both single and double barrel configuration it has a proven use in the field with a quick reload but a limitation being the number of rounds carried.

The ZX76 shotgun is used in all combat situations on BG386, singleplayer, multiplayer and survivor. The ability to fire in both single barrel and dual barrels allow for stopping capability in defense and combat. A similiar rate of fire (RPM) in both single or dual configurations, single discharge allowing for a targeted shots and dual barrels for stopping and wide dispersion.

Shotguns are available in the following;
Aliens (film)
In the film Aliens, Hicks is the only marine who carries a shotgun (M37A2), using it as they enters the Atmosphere Processor as orders have been given to only use Flame thrower units.

Predators (game)
As in the film Predators, a shotgun (AA12) is carried by Royce.

Armat B15 Timed Explosive
High-explosive compostion B15 fragmentation shells, when fired, the shell's fuse is activated, creating a short delay before detonation.

In the film Predator 2 Spas-12 shotguns are used mainly by Lt.Mike Harrigan.

Aliens (film)
Hicks M37A2 shotgun in the film was last used in the APC, in the game Aliens: Colonial Marines Hicks shotgun is found aboard the Sulaco.