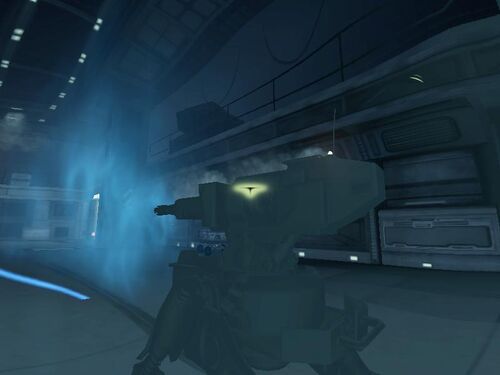 Sentry Guns are used in tactical deployment situations which first appeared and were deployed in the film Aliens, a fire suppression armament now used in multiple combat situations on BG386, LV426 and LV1201.

An alloy constructed armament which is deployed on to a stand of similiar construction, this is motorised and the gun can sweeps from side to side. A power source and tactical field support control interface make up the rest of the Sentry Gun.

Deployment is set to sweep in an arc of between 30° - 60° in front of the gun, this is a self automated armament and is fully functional once input parameters are entered, these define sweep arc, rate of fire and whether burst or rapid fire is required. A tactical tracking and proximity detect make up the targeting system, this system has few limitation and is very effective in all combat tactical support roles.


In Aliens v Predator 2 and Aliens (film), Sentry Guns are equipped with an user controllable interface, a user can then define sweep and fire patterns and rate of fire.

Sentry Guns are used against Winter aboard the USS Sulaco in the levels Battle for Sulaco and Sulaco Falls by WY-Grunts and appear in several areas on the surface of LV426 in and about the Weyland-Yutani Facility, disarming them will allow the team to continue. They themselves use Sentry Guns in different levels to fend off the Xeno advance.

Aliens v Predator
Sentry guns in the game attack both aliens and predators.


Aliens v Predator 3
Sentry Guns are deployed in the Jungle level against Dark as he starts his missions and in Medical as Number 6 starts her missions and later as Dark starts in this level. Sentry Guns also appear in other singleplayer missions like Colony, Refinery and Ruins, a player playing as a Predator and Alien can disarm the units by interacting in the user interface terminals destroying them or damaging the units themselves.

Aliens (film)
Deployed in the film Aliens as the remaining squad secure Operations in Hadley's Hope after they fail to escape in the Dropship which crashes on the surface. Hicks now in charge deploys four Sentry Guns (two in each corridor) in the corridors that approach Operations. These are successful and hold back the Alien advance causing them to find an alternative route.

Aliens: Infestation
In the game sentry guns are used against the USS Sephora marines but can be deactivated by finding a way behind them.

Aliens: Colonial Marines
The UA571/C Sentry Guns from the film Aliens have been modified in the game, these don't feature a controllable user interfaces but are fully operational once deployed and are referred to as Turret Guns. These can be deactivated in singleplayer and deployed in multiplayer playing as a Marine, Aliens are unable to damage or destroy guns but can avoid them.

Aliens (film)
UA 571-C Remote Sentry Guns deployed in the corridors around Operations in Hadley's Hope were configured and commanded via special terminals using GRiD Systems laptops. Models used on screen were the 'GRiD Compass II 1139', these ran a DOS program as the gun's interface.

Aliens v Predator: Extinction
Synthetics carry the M4A3 Pistol and are the only unit capable of deploying and carrying a Sentry Gun. A Sentry Gunner upgraded is designed to counter long-range attackers. Its sensors also defeat Predator cloaking.