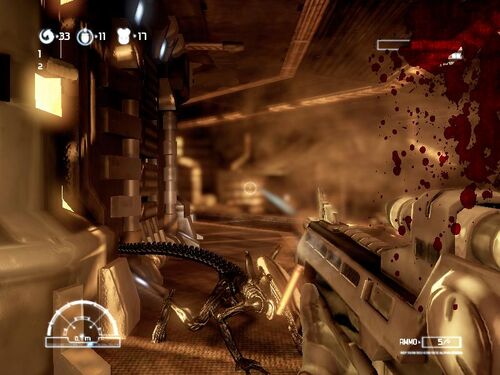 M42C Scoped Rifles are in use in combat situation on BG386, a similiar weapon to the WY102 Scoped Rifle is used in Aliens v Predator 2 on LV1201.

M42A, M42C and WY102 Scoped Rifles both have a targeting scope and clip reloading from an under-gun clip mechanism. These are of alloy contruction and are produced to be light for quick targeting in combat situations.

Due to their lightness, high rate of fire and stopping capabilities they are the scoped rifle of choice for tactical combat situations. The M42C Scoped Rifles feature a inscope targeting capabilities for outlining a targets silhouette, an operator can then decide whether to fire on the silhouetted target. This has the effect of outlining a target even in low light visibility, clearly distinguishing between an Alien, Predator or a Marine. The Aliens v Predator 2 WY102 Scoped Rifle has a 20x zoom allowing for targeting of up to 500m. The Aliens: Colonial Marines Scoped Rifle is upgradable in clips carried and camouflage colours.