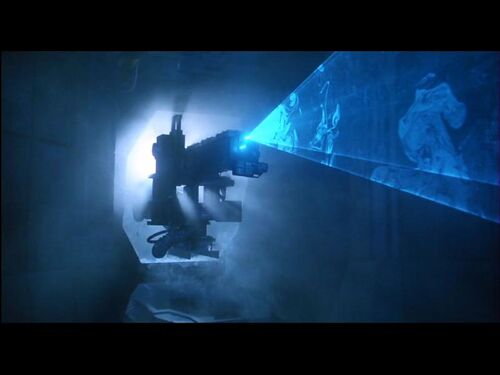 A Scanning Drone is an automated salvage drone, they are deployed aboard spacecraft to define the existence of life forms. They appear in the film Aliens aboard the salvage craft and the Narcissus.

Made from a synthetic alloy, a Scanning Drone's laser diffusion detectors scan for thermal and light source energy. Fully automated and powered for entire spacecraft scanning.

A Scanning Drone has been deployed aboard the Narcissus, and has similiar capability aboard other spacecraft.

Appearances in the following;
Aliens (film)

Deployed aboard the Narcissus

Scanning Drone's are available in the following;
Deployed aboard the Narcissus by the crew of the salvage craft.

Because a new set of the Narcissus was built in the film Aliens certain small but noticeable differences occurred as the scanning drone entered and scanned around the spacecraft. These were mostly the shape and design of the stasis unit, in Alien the lid and unit were curved at the end were as in Aliens the lid was cut width ways with the unit and the end was a more defined shape. The side units by the stasis in Alien were simple and sloped away were as in Aliens they were straight and featured a Weyland-Yutani logo. This kind of difference followed with the door and walls were there were less detail and set at different angles.