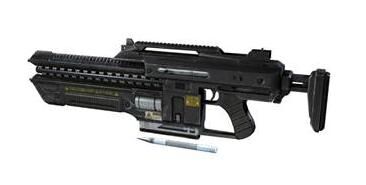 As referenced by Hudson in the film Aliens, the prototype sonic-harpoon artillery remote projectile (S.H.A.R.P.) rifle fires time-delayed, explosive-tipped darts that embed themselves into enemies or terrain a combat weapon used in the game Aliens: Colonial Marines.

A 10 round clip, 90 rounds carried rifle without an upgrade option.

Made from alloy and issued in Aliens: Colonial Marines, equipped with a standard iron sight.

The appearance of the S.H.A.R.P. Rifle looks somewhat similar to the Pulse Rifle but with a(n) plasma charger, smaller clip, and default sites only.

A rifle that carries few rounds but with a capability of a one shot kill, a target shot will result in the enemy exploding and an aligned shot can effectively take several targets out at the same time. A plasma glow results in a round impacting a surface with some air distortion from the trajectory.

Available as a pre-order and DLC with the game Aliens: Colonial Marines.

These weapons appeared in promotional clips of gameplay before the game's release used by USCMs in multiplayer.