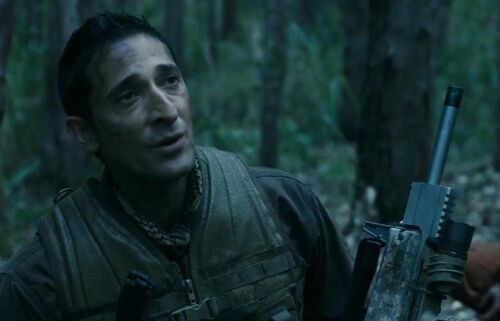 Royce is a an American ex-military soldier turned mercenary who reluctantly assumes leadership of the group of humans stranded on the alien planet.

Carries an AA-12 equipped with explosive shells, a Pistol, Knife and a Maschete.

Predators (film)
Tracker, Falconer and Berserker bring the humans to the game reserve planet for hunting.

They first start tracking the group as they near their encampment with drones, once located they send Predator Dogs, which attack and cause the group to disperse. This attack leaves Cuchillo dead but they are still tracked until they reach their camp, with out warning the group is attacked causing them to run through the camp defending themselves and as they do so Mombasa is killed so they flee towards the waterfall and safety.

Later they meet up with Noland who after explaining who he is leads them to the Subterranean Drill were he has lived in the last few hunts. During the night Noland tries to kill them and as they try to escape Royce fires his weapon so attracting the Tracker and Berserker. The group escapes with the loss of Nikolai and Stans and as they continue they are tracked by the Falconer. Hanzo stops and takes on the Falconer in combat which ultimately leaves them both dead.

As the survivors continue Edwin and Isabelle are captured in nets and brought into the Predator Camp by the Berserker but Royce reaches the camp first and sides with the Classic who he has just released. As the Berserker enters there is a fight to the death were Classic dies, Royce who had chosen not to escape in the last Predator's Ship returns to battle the Berserker and eventually wins the battle with help from Isabelle.

Royce and Isabelle are the only survivors left at the end. 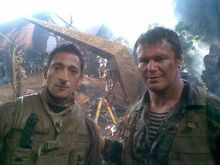 As with the other actors Adrien Brody watched Predator before filming and before auditions, he used the earlier film as reference in his acting of the character Royce.

Adrien opinion on the character Royce having increased 20 pounds from his last role was, 'The important thing for me rather than a six pack or anything about being kind of buff is to put on a little size both as a look, but also as what that does for me as a person, how I feel, to feel strong enough to handle myself in a situation that this guy would be presented.'

Having restricted his diet, Adrien set off in the gym lifting heavy weights. A physical change was important for him in understanding and getting into the role of the character. Also studying military field manuals, Royce said about the character, 'But he's a survivor and I think ultimately just like a scientist there has to be a level of detachment in order to put survival first. I think that makes him very well suited for the circumstances that he's found himself in.'

As with the other actors, stuntmen stood in for the fall into the water with the actors jumping a short distance and swimming the rest of the distance to the shore.

For Adrien, Joey Anaya stunt doubled for him. Various other stuntmen stood in for the actors like Ryan Ryusaki a stunt performer. These would include a falling scene, running and being caught in nets.

Tracker, Falconer and Berserker bring the humans to the Game Reserve planet from Earth for hunting, after having been parachuted into the Game Reserve they all group together, with Royce taking charge and later meeting up with Noland.

Adrien Brody wanting to bring a complexity to the character that would contrast with Schwarzenegger's muscle-bound role in the original film, contrary to Antal and Rodriguez who specifically wanted to avoid casting an actor physically similar to Schwarzenegger.