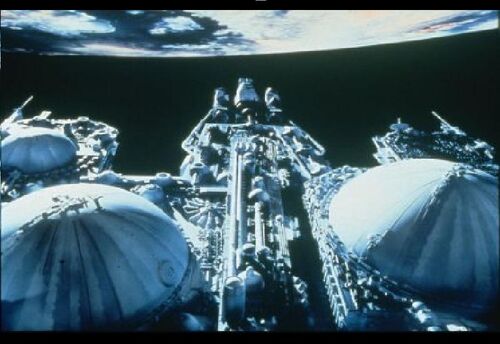 The Refinery Installation is a mining and holding installation towed by the Nostromo on a return trip from Thedus to Earth, featuring in the film Alien.

Appearances in the following;
Alien (film)

The Nostromo detaches from the Refinery Installation, landing on the surface of LV426 an as yet unsurveyed planet and investigate the source of an unknown signal.

Brian Johnson the special effects supervisor for Alien designed the Refinery Installation and Narcissus, drawing preliminary sketches for both, for the Narcissus these showed the spacecraft, it's engines and docking hatch, Johnson also designed and made the docking clasp which held the Narcissus. In production a sliding bay door was added which would encapsulate the spacecraft in flight. 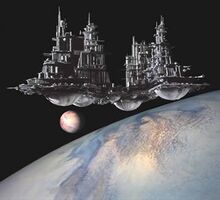 The spaceships and planets for the film were shot using models and miniatures. These included models of the Nostromo, its attached mineral refinery, the escape shuttle Narcissus, the alien planetoid, and the exterior and interior of the derelict spacecraft. Visual Effects Supervisor Brian Johnson, supervising modelmakers Martin Bower and Bill Pearson and their team worked at Bray Studios, roughly 25 miles (40 km) from Shepperton Studios where principal filming was taking place. The designs of the Nostromo and its attachments were designs from Ridley Scott's storyboards and Ron Cobb's conceptual drawings. During filming Scott insisted on numerous changes with the models, leading to conflicts with the modeling and filming teams. Ordering more and more pieces be added to the models until the final large version with the refinery required a metal framework so that it could be lifted by a forklift. He also took a hammer and chisel to sections of the refinery, knocking off many of its spires which Bower had spent weeks creating. Scott also had disagreements with miniature effects cinematographer Dennis Ayling over how to light the models. 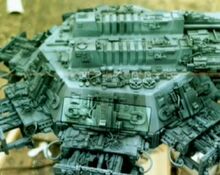 For the scene in which the Nostromo detaches from the refinery, a 30-foot (9.1 m) docking arm was created using pieces from model railway kits. The Nostromo was pushed away from the refinery by the forklift, which was covered in black velvet, causing the arm to extend out from the refinery. This created the illusion that the arm was pushing the ship forward.

The film Alien is set about 30 years after the film Prometheus, a Weylan-Yutani spacecraft the Nostromo with Dallas, Ripley, Kane, Lambert, Brett, Parker and Ash emerge early from stasis on companies orders to investigate a distress signal eminating from a unsurveyed planet.