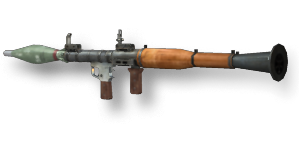 The RPG is a shoulder-fired, anti-tank and anti-personnel weapon system which fires rockets equipped with an explosive warhead. These warheads are affixed to a rocket motor and stabilized in flight with fins.

Made from alloy and issued in Aliens: Colonial Marines. An M5 RPG comprises two main parts, the launcher and target locator and a rocket equipped with a warhead. The most common types of warheads are high explosive (HE) or high explosive anti-tank (HEAT) rounds

RPG's are very effective against armored vehicles such as armored personnel carriers.

Encountered in the level Derelict Reclaimed and used to destroy the AA guns targeting the UD4L Cheyenne Dropships.

Once found the weapon can then be used in the continuing levels in singleplayer and in multiplayer when collected.