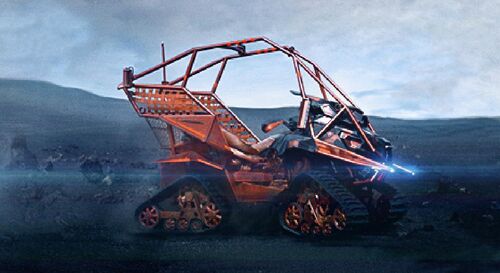 Quad Tracks are single man ATV's, these are similiar to quad bikes but are equipped with tracks rather then wheels. Capable of carrying two, these transport vehicle are equipped with 4-tread, track-belted wheels able to negotiate near-vertical terrain carrying small payload. With the NR6, Weyland planetary engineers are able to survey previously inaccessible areas of newly discovered proto-colonies. Vehicles reach top speeds of 88 mph in standard atmospheric pressure and gravitational pull. Variable-friction axes for front and rear wheels provide micro-torque gear adjustments for maximum safety and mobility across any foreign surface.

A Quad Track is an all terrain vehicle made for off road, ice/snow and loose rock conditions.

Made from an alloy kevlar composite, a Quad Track is fitted with a roll cage and engine with low ratio gearing for quick acceleration.

A Quad Tracks' use is unrestricted, but best suited for off road and ice/snow conditions.

During the first day the crew use the quad tracks and journey into the Alien Temple, a storm cuts their trip short and they return at full speed loosing one off the vehicles as they return, this was later returned and stayed in the cargo bay.

The next day David split from the group choosing to follow the detected signal, on arriving David discovered a Hibernation Room full of urns which was part of the Derelict spacecraft deep underground. Continuing along this route, brought him into the Derelict's Orrery and upon activating a 'holo integrated message' David understood the controls and interacted with a Holo Map.

David returned and spoke to Weyland, who was still in stasis. The next day they all ventured out again with one of the mercenaries taking the quad track back aboard Prometheus.

Quad Tracks are available in the following;
The crew of Prometheus use Quad Tracks for travelling around LV223, they are kept in the Cargo Bay along with the RT all terrain vehicles. All ATV's are maintained by mechanics who are stationed aboard Prometheus as part of their duties.

The RT01 appeared for the opening weekend of Prometheus on a special set for fans at the London Transport Museum, Covent Garden Piazza, London and stayed there for a few days. The RT02 has been on display with one of the NR6s since July 2012 until April 2013 at the Coventry Transport Museum.

Both the NR6s and RT01/02 were made in the UK for Pinewood Studios, both vehicles are drivable but were transported on low loaders to their destinations.

Concepts appear in the book Prometheus: The Art of the Film, the quad tracks were designed similiar with the ATVs and were designed to be able to transverse rough terrain.

Both quad tracks were brought to Iceland for filming which were constructed by Trevor Wood's team from quad bikes that were refitted with futuristic designs.