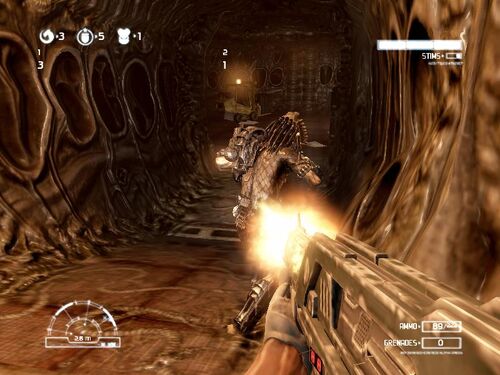 M41 Pulse Rifles are in service with the U.S.C.M.s.

Constructed of 'alloy', with a standard barrel and under-barrel grenade launcher the M41 Pulse rifle have digital rounds counter located on one side with a standard locking clip mechanism and grenade loading. Weighing a mear 7kgs the chosen firearm for marines in the field.

M41A Pulse Rifles are available in the following;

Armat A9 Suppressor
Cylindrical barrel-mounted sound suppressor reduces speed of propellent gasses resulting in an overall reduction of volume for each shot fired.

Skins:
Old Glory
Custom paint job consisting of an American flag pattern detail on the sides of the rifle.

Five Alarm
Custom paint job consisting of a flame pattern on the sides of the rifle.

Aliens (film)
Carried by Marines as they enter Hadley's Hope facility on LV426, later Ripley equips herself with a Pulse Rifle and attaches a Flame thrower as she searches for Newt.

Weapons used by the USCMs were constructed from real fully functional weapons. Armourers used guns they found to be the most reliable when firing blanks and those which looked futuristic. Pulse Rifles were built from a Thompson SMG with an attached forend off a Franchi SPAS-12 shotgun and a Remington 12 Gauge Model 870P receiver with barrel.

One live fire pulse rifle referred to as the 'hero' version was one of the few practical guns used on set, there were only 3 or 4 live fire weapons required for filming but hero was the only one that had both built in firearms functioning. A large number of lightweight fibreglass pulse rifles were also required for use as the live fire version was quite heavy. Flux versions were also used for background filming and as set dressing and had the added advantage of not requiring an expensive armourer to be on set when the real guns were not in use.

In filming weapons fired blanks and plastic bullets similiar with air-shots with the FX being added in post production for both sound and muzzle effect.

The weapons have since been repainted many times from their creation, colours included black for Alien 3 and a Transvision Vamp video, with original colours being an olive green military colour.

Alien 3 (film)
Carried by Weyland-Yutani Synthetics Commados aboard the USS Patna as they arrive at the Class C Work Correctional Unit on Fiorina 'Fury' 161. These were Pulse Rifles used in the film Aliens but painted black.

Aliens v Predator
Standard issue for all Marines in the game on LV426.

Aliens v Predator 2
Standard issue for all Marines in the game on LV1201.

Aliens v Predator 3
Standard issue for all Marines and Synthetic combats on BG386 in both single and multiplayer.

These weapons appeared in promotional clips of gameplay before the game's release used by USCMs.

Aliens: Infestation
Pulse Rifles are available for all marines as a standard load out, these are equipped with 99 rounds per clip with clips collectable during the levels.