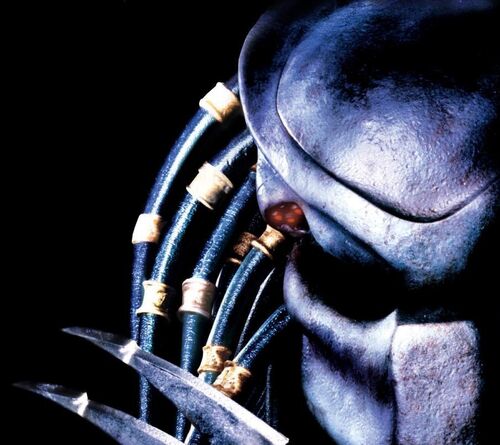 A Predator's Mask is a tactical communication interface HUD with a built-in targeting laser that all Predators possess. A standard mask will feature targeting laser, vision modes, audio analyzer and tactical analysis, these features operate together allowing a Predator a way of deciding by way of a retina tracking system and field motion variation. Vision modes, HUD, audio analyzer and laser tracking are all selected this way, tactical weapon selection and situation analysis is preformed by the wrist worn communicator.

Constructed from ploy-synthetic alloy, the Predator's Mask is equipped with a HUD and vision modes for tactical analysis, a targeting laser is integrated into a masks exterior and connected to a controller in the wrist device, from which it gets it's power. These are made for the Predator to fit, a unique style and colour is chosen by Predators as a prowess in combat. Predators from certain 'clans' wear similiar masks as other Predators from the same group appearing in different locations on other planets and Earth.

A Predator's Mask is an indispensable piece of equipment for all hunter/hunted situations, a mask not only features visions modes and enemy targeting but also features zoom and tactical analysis, which is why all Predators are equipped with one for a hunt (AVP: Evolution and Predators™ (i-pad) excluded).

A Predator's Mask have different vision and play back modes;
Thermal - blue in colour, Tech - red in colour, Alien - green in colour, and Normal vision.
Also in Alien v Predator (film), Predators have an ability of x-ray vision, which is demonstrated on Weyland before being killed.

Predators™ (i-pad)
In the game Predators you play as a Predator who can unlock 'masks' during gameplay of the characters that appeared in the film, once unlocked these can be worn and upgraded.

AVP: Evolution
In the game AVP: Evolution you play as a Predator from a Jungle Hunter clan fighting against Super Predators and start with no mask but can collect the Classic, Wolf, Falconer, Tracker, Celtic and Berserker masks.

Super Predators appear in Predators (film), Predators™/Predators™ Lite and AVP: Evolution these are enemies but also in the games a Predator can adorn their equipment, plasms castors, spears, discs and masks.

Alien v Predator 3
In Aliens v Predator 3, Predators are not equipped with Tech vision but use their focus detecting mines, nodes and others predator equipment.

Predators™ (i-pad)
Once collected a Predator can wear either the Berserker, Tracker or Falconer mask and equipment in gameplay.

AVP: Evolution
Masks from the Classic, Wolf, Falconer, Tracker, Celtic and Berserker can be worn which are from Predator and Alien v Predator films.