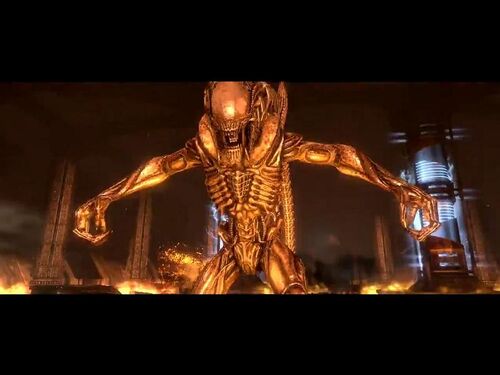 A Predalien is an alien hybrid that appears on Earth, BG386, LV1201, LV742 and LV426. Predaliens are Xenomorph/Predator alien hybrids and are produced from a Face Hugger laying an embryo inside a Predator.

Appearances in the following;
BG386
Pyramid

Earth
In the Aliens v Predator: Requiem (film), due to a hull breach in the Predator Spacecraft, the spacecraft crashes on Earth, a Predalien is produced from one of the dead Predators, other Face Huggers then go onto attack a father and son who are hunting near the town of Gunnison.

In Alien v Predator (film) a Predalien Chest Burster erupts from the dead Predator's body that was brought aboard the Predator's Ship.

A Predalien also features in the game Aliens vs. President.

BG386
Referred to as the Abomination, Predator 'Dark' battles the Predalien in the level Pyramid.

LV1201
A Predalien is a playable character that appears on LV1201 in the game Aliens v Predator 2: Primal Hunt.

LV426
Predaliens in the game Aliens v Predator are different from other games as they crawl on all limbs and jump short distances.


The "Predalien" was first depicted in a painting by Dave Dorman, and subsequently featured in the Aliens versus Predator comics and games.

LV1201
A Predalien also appears in Aliens v Predator 2 in the level Betrayal, it is killed by Harrison, this was the alien that was running about the Forward Observation Pods, other Predaliens also appear in the levels Old Debts and Vengeance.

In multiplayer a Predalien is available as a playable character for the aliens.

Alien v Predator (film)
A Predalien appears briefly at the end of the film as all the Predators depart aboard their spacecraft and as the body is left a Predalien chest burster emerges from the body of the dead Predator, showing signs of features of both Alien and Predator.

A Predalien appeared in the film Alien v Predator but was not fully developed, scenes of the spacecraft and predalien were created in CGI.

Aliens v Predator: Requiem (film)
In the film Aliens v Predator: Requiem the Predalien was nicknamed "Chet" on set and in the script. This was to avoid early spoilers about the nature of the creature and the name "Chet" was a reference to the brother from the movie "Weird Science" who was played by Bill Paxton. Predalien in the film is smaller in size to ones appearing in games and is similiar in size with Predators in the film.

The Predalien seen in the film Aliens vs. Predator: Requiem was also a Queen, as it also possessed the ability to impregnate human hosts with multiple Alien embryos. 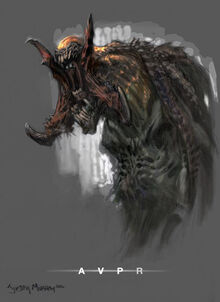 In Aliens v Predator: Requiem ADI creature effects co-designers Tom Woodruff Jr. and Alex Gills were able to develop a grown Predalien. Designs varied but a chosen Predalien design saw it mostly comprised of an Alien but kept the dreadlocks and mandibles of Predators, made in clay miniatures before being sculpted in full size and set in foam latex. 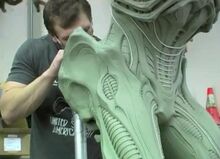 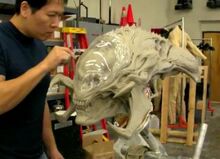 Final designs saw a clear skull inset with a number of animatronic heads being made and six suits one of which Tom Woodruff Jr. would wear as he also played the Predalien. Once set and adorned suits would have an attachable tail which could be screw on and could be controlled by the crew.

Head and arms were scaled to appear 8' tall as Tom was playing as the Predalien, sometimes using a raiser for scenes, the tail added separately was in some scenes digitally adjusted or completely CGI in more complex scenes as in the storm drains.

LV412
The game AVP: Evolution features the Aliens, Queen, Runner, Warrior, Warrior Carved, Warrior Resurrection, Praetorian and Berserker-Alien, a player would start as a Drone and can then upgrade their character's appearance with the other Alien skins and increased ability after gaining the required xeno points. A Predalien becomes available with the latest released update, upgradable skins and increased ability are gained in a similiar way. Later a Predalien is selectable in the battle editor along with all other enemies that appear in game.