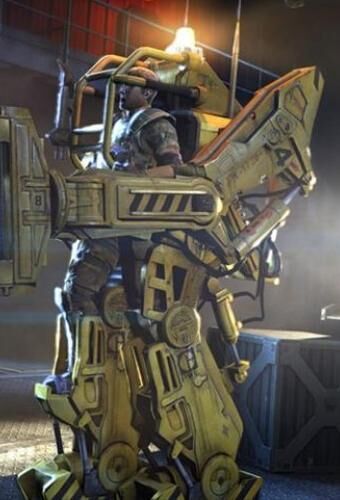 Constructed of an alloy polymer a Power Loader has an intuitive control system with direct force feedback, allowing the operator to directly feel the movement of the robot while controlling it.

Power Loaders are used for moving and carrying cargo around on spacecraft and in colonies.

Aliens (film)
Ripley retrains as a loader in the film and as they are enroute is able to assist with loading in the cargo bay. She later uses a loader as she, Bishop, Hicks and Newt return from the surface to battle against the Alien Queen which had stowed aboard the Dropship, as Ripley opens the outer airlock the Alien Queen and the Power Loader are expelled throught the airlock into space.

Aliens: Colonial Marines
A Power Loader appears in a number of areas aboard the USS Sulaco, in the level Battle for Sulaco a loader is used to gain access back into the cargo bay, later on the surface of LV426 in the level The Raven, Winter jumps in a loader and must defeat the Raven to continue.

Various
In the Aliens Anthology interactive menu, a power loader is referred to as a Caterpillar P-5000 Power Loader with a load capacity of 4000kg, powered by hydrogen fuel and with 20kw linear motors actuators.

Aliens (film)
As the Power Loader first appeared in the film Aliens for moving cargo around flight decks and loading bays aboard spacecrafts all other appearances model themselves on James Cameron's designs.

Ripley operates the full scale Power Loader with help from John Lees. Scenes were cut for a wide shot hiding the controller and models and miniatures filmed.

The Queen and Power Loader models for the cargo bay battle were 2' high, groves in the floor allowed control of the scaled models with a number of puppeteers controlling them from underneath. A variation of full scale and models were used through the filming.

A 1' model Queen and Power Loader was used for filming the air lock scene and because the Sulaco was only modeled on one side the scene with the Queen falling out of the air lock was produced with stop motion photography. A couple of 1' models were made as the first was damaged by fire.

Aliens: Colonial Marines
A Power Loader is available in Aliens: Colonial Marines, these allow the user to open doors and fight the Alien Queen and some appeared in demos equipped with flamethrowers. Power Loaders appear on LV426, aboard the USS Sulaco and aboard the USS Sephora unused in the firing range. Loaders in game are limited for short tasks unlike in the game Aliens v Predator 2.

Aliens v Predator 2
The Exo-suit is an armoured Power Loader which allows a player greater agility, they are equipped with flamethrowers, railgun/miniguns and a grenade launchers. They are available in the marine's campaign Savior and in multiplayer gameplay in Aliens v Predator 2.

A Power Loader is also used aboard the USS Verloc as they approach LV1201 for cargo movement in opening sequences.

AVP: Evolution
Appearing in several levels include an Alien level were a player needs to defeat a marine in a Power Loader equipped with a Flame thrower. As gameplay is only for a predator or alien, players don't battle using the loaders.

Power Loaders have appeared in multiple games since the film Aliens, based around James Cameron's design.