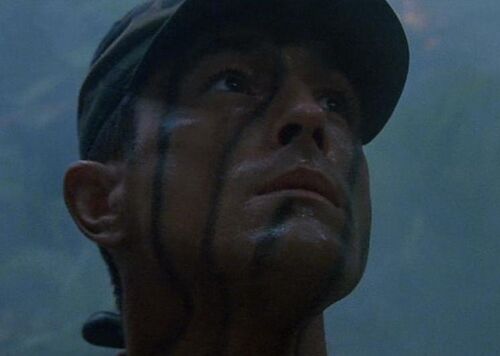 Jorge "Poncho" Ramire is a Chicano fluent in Spanish who translates initially for Anna in the film Predator.

Poncho is part of Dutch's elite special forces team that enters the Jungle looking for a helicopter and it's crew in guerrilla territory in Central America.

Poncho is injured by a trap set for the Predator and is then carried to the drop site helped by Dutch and Anna.

Appearances in the following;
Predator (film)

Carries a MP5 and MGL.

An alien spacecraft enters the Earth's atmosphere and jettisons a pod, which descends onto the planet. Some time later, Major Alan "Dutch" Schaefer arrives in Central America with his elite team for an operation to rescue a presidential cabinet minister and his aide who had been abducted by guerrilla forces. The team consists of Mac Eliot, Blain Cooper, Billy Sole, Jorge "Poncho" Ramirez, and Rick Hawkins. Dutch's old military friend George Dillon, now working for the CIA, accompanies them as a liaison. The team is inserted into the jungle by helicopter and a Predator begins it's hunt.

They soon find the wreckage of a downed helicopter and later, the remains of Army Special Forces, whose presence in the country mystifies Dutch, while shocking them that the bodies are found to be hanged with their skin removed. They track the guerillas to a heavily defended rebel encampment which they destroy, except for a woman named Anna whom they take prisoner. Dutch is enraged when Dillon confesses the rescue mission had been a ploy to get his group to attack the camp and that the men they found earlier had disappeared in a failed rescue of two CIA agents. As the team make their way to the extraction point, they are observed from afar by an unknown creature using thermal imaging.

Anna briefly escapes, but when Hawkins catches her, he is seized and dragged off. The nearly invisible creature spares the unarmed Anna. Moments later, while the team is looking for Hawkins' killer, Blain is killed. Mac physically sees the creature and opens fire on it, but it disappears into the jungle. Anna offers the team insight on the creature which is something of a local legend. The team sets a trap, but it avoids capture, severely wounding Poncho in the process. Mac and Dillon are killed in the ensuing chase, and Billy is slain making a stand. The Predator catches up to Dutch and engages in a short shootout during which Poncho is killed. Realizing the creature only attacks those possessing weapons, a wounded Dutch sends Anna unarmed to the extraction point. Jumping off a waterfall, he narrowly escapes the creature by inadvertently masking his body's heat signature with mud and witnesses the Predator's true form when its active camouflage fails in the water. Dutch applies more mud, improvises various weaponry and traps, then baits the Predator into coming out by starting a large fire.

Hearing Dutch's war-cry, the Predator arrives to investigate and eventually traps him. Discarding its electronic weaponry, the alien challenges Dutch to hand-to-hand combat. Battered and barely able to move, Dutch manages to drop the counterweight from one of his traps, which falls and crushes the creature. As Dutch asks the mortally wounded alien what it is, the creature mimics his question in garbled English and then activates a self-destruct mechanism on its wrist device while laughing, gradually increasing its laugh into a human-like pitch. Dutch barely escapes the massive explosion and is rescued by helicopter along with Anna.

Poncho's character is played by Richard Chaves.
Poncho is killed as they make it to the drop site.

The location of the guerrilla camp was a local restaurant called El Eden, John Vallone production designer set about making jungle filming as realistic as possible. As the film was shot during the dry season, Enrique Estevez and a crew with fire hoses went around a month before shooting watering the set and planting a number of artificial 30' tall trees, also positioning large artificial rocks and vines which were woven with the natural landscape creating the rainforest environment. 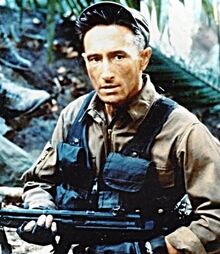 As with the other actors Richard Chaves' character wore combat fatigues but also lightly equipped as his background was that of the teams translator.

With the dry conditions when filming water would be applied on actors keeping the continuity between scenes, this would also include blood effects and cuts. Although the director on-set requested prosthetic mud be made and applied while shooting, a form of clay was made with a binding agent and sprayed-on drying quickly, this could then be washed off after filming or reapplied as needed.

The film Predator is set in the late 20th Century in the jungles of Central America.