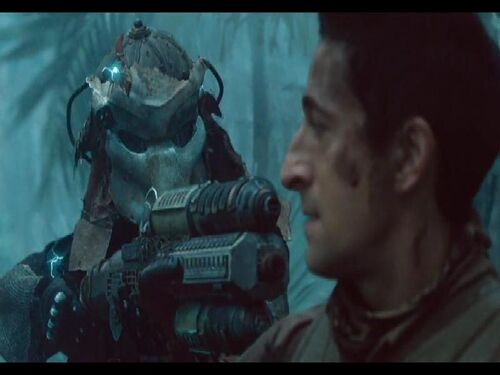 A Plasma Gun is a Predator's firearm from the film Predators.

A combat weapon used in Predators 2010. This weapon fires plasma bolts from particle accelerators attached to the barrel.

Made from poly-synthetic alloy, two chambers of particle accelerators sit on either side of a barrel with the firing mechanism configured similiar to a shotgun.

A Plasma Gun has many uses and a high RPM discharge make it capable for combat use, with minimal charge-up time.

Predators (film)
Noland first appeared carrying a Plasma Gun as the group of mercenaries were being stalked by another prey from a different planet. They used Edwin to flush out the stalker so Isabelle could shoot it, after she fired killing it she realized she missed and as they stood by the dead prey Noland appeared cloaked, uncloaking himself explaining he had shot it.

Predators (film)
A Plasma Gun was captured and only used by Noland in the film Predators 2010.

Predators (game)
A Plasma Gun is used in the game by Noland. Plasma Gun rounds are similiar with the Berserker's Plasma Cannon in the game, these can also disrupt a Predator's cloaking.

AVP: Evolution
A Plasma Rail-Gun is quoted as used in the game from version 1.3 but this is a Plasma Castor.