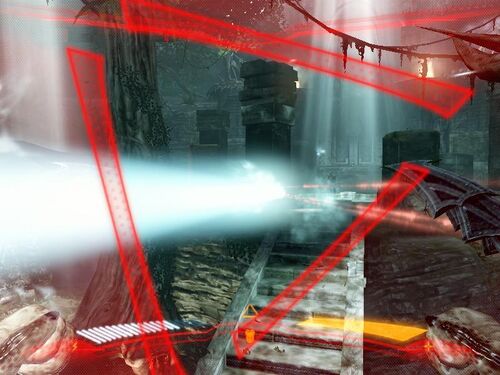 A Plasma Castor has 2 features, targeted and single shot. Targeted a red laser targeter can be zoomed in and locked on to a target with a triangulated red laser marker. As the targeter attempts to 'lock on' to it's target, the Plasma Castor charges up, as soon as a lock on is indicated the Plasma Castor with be at full charge, pressing release will target the indicated target even if the target attempts to evade a hit. Any less then full charge the targeter will not have locked on and may possibly miss the target completely. A near miss can in some situation cause damage, a partial charge on target can incapacitate a target allowing a second shot to be fired on target.

Made from a ploy-synthetic alloy, the Plasma Castor in combat sits on the shoulder with connected circuitry to the targeting laser, this is embedded in to the Predators Mask.

A preliminary combat weapon which can be used for short to long range targets. A limitation of the Plasma Castor is the need to acquire a targeted 'lock' onto the target, this requires a few seconds, ample time to acquire cover, for this reason a weapon for open areas.


Various
In the game AVP: Evolution a Predator can upgrade his Plasma Cannons and select a weapon from various films, these are less effective then used by other Predators.

In Alien v Predator (film) Predators didn't acquire their Plasma Castors until after the battle had started in the Pyramid.

AVP: Evolution
In the game the Plasma Cannons of the Classic, Wolf, Falconer, Tracker, Celtic and Berserker are used.

All Predators which a player can play, Berserker, Tracker, Falconer and Classic carry their Cannon on their left shoulder. The Cannon can target all enemies except for the Super Predators and can be upgraded but are not the same as in the films carried by Predators.

Plasma Gun rounds are similiar with the Berserker's Plasma Cannon in the game, these also disrupt a Predators' cloaking.