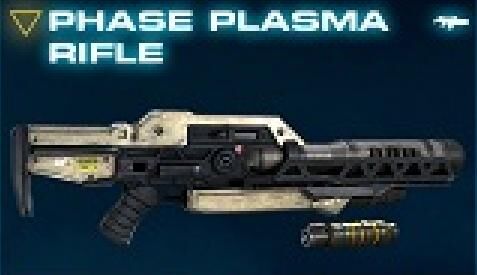 XM99A Phase Plasma Rifles are part of a Marine's armoury.

A XM99A Phase Plasma Rifle fires high velocity plasma rounds, carrying 12 rounds with a 4 round clip reload, equipped with an Armat S11 Variable Zoom Sight as standard and instead of a round counter a charge meter displays the remaining rounds.

Constructed of alloy, and aligned similiar to a Pulse Rifle and M4RA Battle Rifle, these clips are reloaded individually from under-barrel grenade-like ammo canisters.

Used in combat situations in the Aliens: Colonial Marines campaigns.

XM99A Phase Plasma Rifles are available in the following;
All Aliens: Colonial Marines single/multiplayer campaigns with the Collector's Edition.

XM99A Phase Plasma Rifles are available in the Aliens: Colonial Marines campaigns with the Collector's Edition.

The rounds are clip reloaded unlike other rifles and with increased velocity this will show as a plasma glow as the round is discharged. These rifles are non-upgradable like the collectable weapons from the film Aliens.