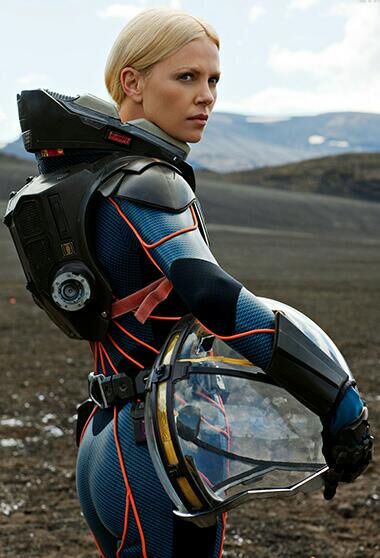 Oxygen Canisters are used by Prometheus' crew for travel on LV223.

Oxygen Canisters are connected in the back of the crew's Space Suit, these supply oxygen for the wearer and the suits are capable of being equipped with two canisters for prolonged use.

Oxygen canisters are available in the following;

Shaw uses replacement oxygen canisters shortly after the Last Engineer crashes the Derelict because her supply is depleted with less then two minutes left. She goes for the supplies in the landed Escape Craft finding the oxygen canisters in a cabinet near the entrance.

The air canisters on set are small tubes with rounded ends and were made of a sold resin or hard grey rubber, painted a metallic grey. There were engraved lines circulating the tubes and small red and blue faux lights at either end. Holes have been cut in the bottom these were to keep the canisters upright when on set, some units had been painted while others stayed unpainted.

Shaw is the only crew member who needs to replace the space suit's oxygen canisters when travelling around LV223, getting them from the dispenser near the entrance of the Escape Craft.

Genuine Prometheus oxygen canisters are available for purchase at Prop Store, along with the wall diorama surround.