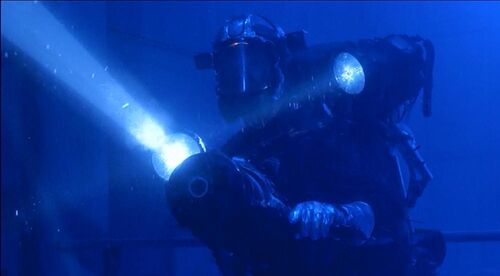 A Nitrogen Gun is used to capture a predator by Special Agent Peter Keyes and other special task force agents as they tried to corner it in a slaughter house. Keyes posed as a DEA agent leading a special task force investigating a drug conspiracy, as the Predator appeared at different locations the special task force could seal off the area with their team.

A Nitrogen Gun is a liquid fueled gun capable of slowing and then freezing a captive.

Made from an alloy, a Nitrogen Gun cools the captive by disorienting and slowing him allowing it to be captured.

The Nitrogen Gun unit found it's uses in the film Predator 2.

Appearances in the following;
Predator 2 (film)

Once the special task force knew about the location where the Predator fed, they set a trap and equipped the team with the guns. As they were about to enter the slaughter house Harrigan appeared asking for answers to question. Keyes unconcerned about matters continued and Harrigan monitored them in their control room. Soon as he notices that the Predator is circling around behind them because he had spotted their ultraviolet flashlights he warns them the team only to be ignored, so rushes in after them as they are all killed only to be up against it himself.

Nitrogen Guns are available in the following;

The Special Agents with the use of the Nitrogen Guns though of capturing a Predator alive and for it's technology.