Rebecca 'Newt' Jorden is a one of many colonists and their families living at the colony on LV426. Russ and Anna are parents of Tim and Rebecca, colonist surveyors from Hadley's Hope. As other groups they form teams who are sent out or given locations for surveying, helping them along they use ATVs called Daihotai Tractors, 8 wheeled off-road vehicles designed for use on lunar colonies. Slow with a long range, these vehicles form the backbone of cargo and colonist movement.

Given a grid reference to check the Jorden family went surveying in their ATV they found a derelict spaceship, on investigating they were attacked by an alien, this alien attached itself to Newt's father. They returned still with the alien attached seeking medical attention, which caused a spread of the xenomorph infestation through the colony killing all personnel and ceasing transmissions from LV426, this led 'The Company' to send a squad of Colonial Marines to investigate.

Aliens (film)
After having lost her space-flight license as a result of her "questionable judgment" and finding LV-426 is now home to a terraforming colony, Ripley is visited by Weyland-Yutani representative Carter Burke and Lieutenant Gorman of the Colonial Marines who inform her that contact has been lost with the colony on LV-426. The company decides to dispatch Burke and a unit of marines to investigate and offers to restore Ripley's flight status and pick up her contract if she will accompany them as a consultant.

On arriving at LV-426 the expedition descends to the surface by dropship where they find the colony seemingly abandoned. During a reconn two living facehuggers are found in containment tanks in the medical lab and the only colonist found is a traumatized young girl nicknamed Newt. After analysing a 2D tactical display in Operations the squad determines that the colonists are clustered in the nuclear-powered atmosphere processing station, where they find a large Alien nest filled with the cocooned colonists. The Aliens attack killing most of the unit and capturing Apone and Dietrich, Ripley is able to rescue Hicks, Vasquez, and Hudson, with Gorman being knocked unconscious during the rescue. Hicks assumes command and orders the dropship to recover the survivors, intending to return to the Sulaco and destroy the colony from orbit. A stowaway Alien kills the dropship pilots in flight, causing the vessel to crash into the processing station. The survivors then barricade themselves inside the colony complex.

Ripley discovers that it was Burke who ordered the colonists to investigate the derelict spaceship where the Nostromo's crew first encountered the Alien eggs and that he hoped to return the Alien specimens to the company's laboratories where he could profit from their use as biological weapons. Ripley threatens to expose him but Bishop soon informs the group of a greater threat, the damaged processing station has become unstable and would soon detonate with the force of a thermonuclear weapon. He volunteers to use the colony's transmitter to pilot the Sulaco's remaining dropship to the surface by remote control so that the group can escape. Ripley and Newt fall asleep in a medical laboratory, awakening to find themselves locked in the room with the two facehuggers which have been released from their tanks. Ripley is able to alert the marines, who then rescue them and kill the creatures. Ripley accuses Burke of attempting to smuggle implanted Alien embryos past Earth's quarantine inside her and Newt and of planning to kill the rest of the marines in hypersleep during the return trip so that no one could contradict his version of events.

The electricity is suddenly cut off and numerous Aliens attack through the ceiling. Hudson, Burke, Gorman, and Vasquez are killed while Newt is captured by the Aliens. Ripley and an injured Hicks reach Bishop and the second dropship but Ripley refuses to leave Newt behind. She rescues Newt from the hive in the processing station where the two encounter the Alien Queen and her egg chamber. Ripley destroys most of the eggs, enraging the Queen, who escapes by tearing free from her ovipositor. Closely pursued by the Queen, Ripley and Newt rendezvous with Bishop and Hicks on the dropship and escape moments before the colony is consumed by the nuclear blast. Back aboard the Sulaco, Ripley's and Bishop's relief at their escape is interrupted when the Alien Queen stowed away on the dropship's landing gear impales Bishop and tears him in half. Ripley battles the Queen using an exosuit cargo-loader, before expelling it into space through an airlock. Ripley, Newt, Hicks and the still-functioning Bishop then enter hypersleep for the return to Earth.

Alien 3 (film)
Newt's dead body is taken from hypersleep inside the EEV as they salvage the spacecraft and put in the Facilities Morgue. Later with help from Clements Ripley performs an autopsy looking for any signs of an alien creature but keeping it as a secret from Clements a doctor himself. After not finding anything her body is cremated in the Facilities furnaces along with Bishop.

Aliens (film)
Newt's character in the film Aliens is played by Carrie Henn. Henn received a Saturn Award for Best Performance by a Younger Actor.

Russ Jorden and Anne Jorden are Newt's parents who served as "wildcatters" on LV-426. Tim Jorden is Rebecca's brother and the only person who called Newt by her real name, he like his parents appear in the director's cut version of the film. 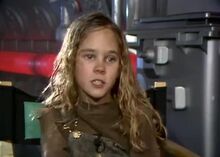 According to the casting director, Newt was the most difficult role to cast, school children were auditioned, but many of them had acted in commercials and were accustomed to smiling after saying their lines, a trait that the producers wished to avoid as it would not suit Aliens' dark tone. Henn, whose father was stationed at an American military base, was chosen out of 500 children for the role although she had no previous acting experience. 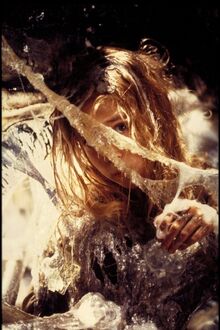 As Ripley runs carrying Newt into the Queen's Liar and along gantries, a lightweight dummy model of Newt was constructed for Sigourney Weaver to carry around during these scenes. In the Atmosphere Processor the full sized Queen ran on rails with control wheels operating the arms, head and legs connected and controlled by cables as it appeared after Ripley destroyed her liar, then was filmed with the 1' model as it ran along gantries after Ripley.

Alien 3 (film)
Newt's character in the film Alien 3 is played by Danielle Edmond.


Newt with Ripley's help survives the escape from LV426 but dies when the EEV crash lands on Fiorina 'Fury' 161 in the film Alien 3.

Before being cremated in the facilities foundry, Ripley along with Clements preform an autopsy on Newt. In production a dummy body and FX was used, as only the torso was in filming a totally accurate likeness wasn't necessary, this torso was filled with the necessary components and dressed in blood, sound FX and post editing increased the believability.

Aliens: Colonial Marines
Newt's doll appears in the game in the underground sewers in Hadley's Hope installation. In the film she was captured by aliens in the cooling water beneath the installation leaving just a doll floating on the water and was taken to the Atmosphere Processor. In game her doll appears on oil drums near a wall in the sewers.

Aliens: The Board Game (Flash)
Two levels of the game includes the character Newt with a set task for completion, in Operations USCMs and Ripley are directed to follow Newt through the air ducts avoiding the Aliens and in Rescue Newt like from the film Newt falls into a sewer, surviving marines try to find her but are too late. Refusing to leave her for the aliens, Ripley arms up from the drop ship and goes back to bring Newt out.

The events of the film Alien 3 are set after Aliens, Ellen Ripley having survived the detonation of the Atmosphere Processor with Bishop, Hicks and Newt escape to the USS Sulaco only for a fire to start, causing their stasis units to be ejected into an EEV and soon after land on Fiorina 'Fury' 161 a prison planet.