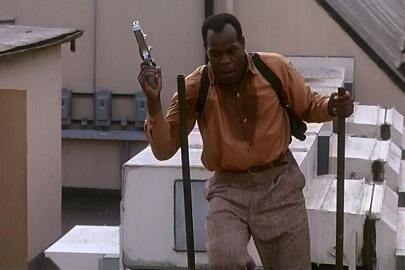 Lt. Mike Harrigan is a Los Angeles police officer in the film Predator 2.

He is Danny Archuleta's friend and partner as they fight the varying drug gangs.

Appearances in the following;
Predator 2 (film)

A Predator watches a shootout between police and the Colombians as Lieutenant Michael Harrigan charges into the firefight to rescue two wounded officers and drive the Colombians back. Before the police can follow them in, the Predator crashes through a skylight and kills the Colombians. Harrigan and his detectives Leona Cantrell and Danny Archuleta find the Colombians have been slaughtered. Harrigan pursues the gang leader onto the roof and shoots him, them catches a glimpse of the camouflaged Predator's silhouette, but dismisses it as an effect of the heat.

As the team clean up Peter Keyes cordons off the area leaving Michael Harrigan and his team with unanswered questions. At the next crime scene and shoot-out in the skyscraper apartment Michael Harrigan's squad is again stopped from investigating the crime scene, this leads Archuleta to return later that night but he is killed, Michael Harrigan finds a spear gun blade from the scene which they then analyze.

Harrigan confronts Keyes at the station still not getting any answers, later meeting up with the leader of the Voodoo Pose for help. The next day after thinking he caught a glimse of a Predator is called to the Alameda Street Station underground where he finds Jerry Lambert has been killed and Leona Cantrell injured. There he gives chase to the Predator which leads him to the slaughter house and Keyes and his team who have it staked-out. Their trap fails and he gives chase to the underground cavern and the Predator's Ship.