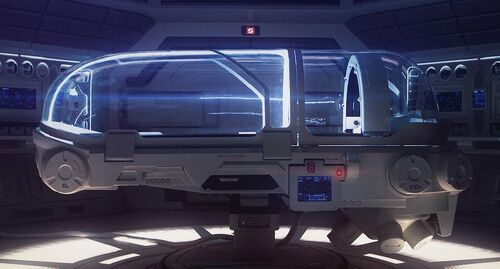 A MedPod is a 720i self-diagnostic incubator, and is in use in the film Prometheus.

MedPods are an apparatus for self-diagnostic and are fully-automated diagnosis and surgical stations.

Made from a titanium alloy, a MedPod features an airtight operating shield, laser scalpel, liquid spray anesthetic and oxygen, carbon-dioxide and nitrogen-oxide supply.

MedPods are used as a fully-automated diagnosis and surgical station. 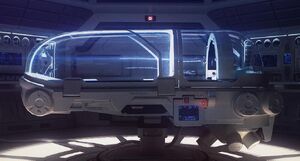 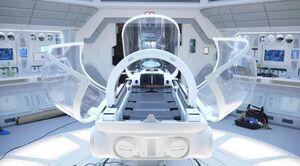 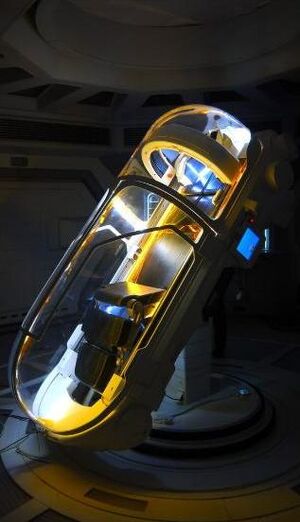 MedPods are available in the following;
Deployed on Prometheus and Earth in Prometheus (film).


Deployed on BG386 in the Research Lab in Aliens v Predator 3 (video game).

Alien 3 (film)
Ripley uses her stasis' medical scanner that was inbuilt into her stasis unit, scanning for any foreign body that she might have had, mainly for a Chest Burster she feared might be there.

Project Prometheus
FDA Approves MedPod for At-Home Use, since FDA approval (June 30, 2070), one dozen have been produced.

Prometheus (film)
MedPods are self-diagnostic incubators which open from the middle, in the film Prometheus a MedPod is used for extracing a creature from inside Shaws' womb. This creature is squid like and grows rapidly.

Originally the MedPods shared an appearance with the stasis units from the film Alien aboard the Narcissus and Nostromo, later sliding and elevating mechanisms were brought in and the units were configured centrally in a MedPod bay aboard Prometheus.

James McKeown senior prop maker on Prometheus at Pinewood Studios worked on all aspects of the medical bay's MedPod (720i) and RT01 ATV's seating and interior. Interfaces (UIs) in filming as Shaw was programming operations were projected in real time and made by Territory Studios and Inventing Interactive this also included the in pod's internal displays. The VFX of the automated surgery in the MedPod was produced by Weta Digital who created the CGI robotic arms which were filmed with both prosthetic and CGI body parts, this included the final surgical procedure with an automated prop of the small Trilobite.