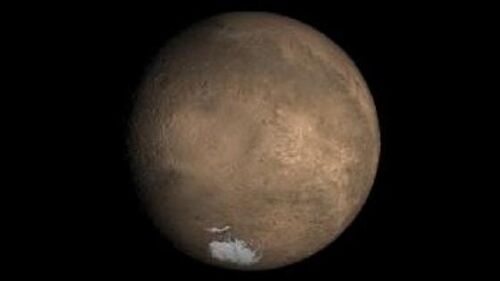 Mars is the fourth planet from the Sun and the second smallest planet in the Solar System. Named after the Roman god of war, it is often described as the "Red Planet" because the iron oxide prevalent on its surface gives it a reddish appearance. Mars is a terrestrial planet with a thin atmosphere, having surface features reminiscent both of the impact craters of the Moon and the volcanoes, valleys, deserts, and polar ice caps of Earth. The rotational period and seasonal cycles of Mars are likewise similar to those of Earth, as is the tilt that produces the seasons.

Appearances in the following;
Prometheus (film)
Prometheus the art of the film
Project Prometheus

Weyland's office from the cargo bay's WMCD presentation was first recorded on Mars a few years before the crew of USCSS Prometheus arrived on LV223.

Mars and it's colonies appear in media connected with the release of the film Prometheus, appearing in concept art and final production in Prometheus the art of the film and Project Prometheus' website. Final designs varied from concepts appearing like standard offices on Earth.