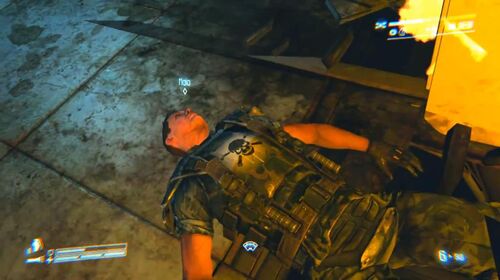 Maio appears in the level Hope in Hadley's, as Winter is in Operations he saves him, A.Duplis and C.Duplis, shortly afterwards while heading for Operation Hohenkerk is captured by an Alien and not seen again.

After being rescued Maio continues in the level Hope in Hadley's with A.Duplis and C.Duplis and helping Winter to defend the Vehicle Bay. Later he with the other rescued and surviving Marines in the level get aboard one of the departing W-Y FTL spacecrafts.

Maio's character only appears in the Aliens: Colonial Marines campaigns.


This character appears in the game as he modeled in the games development for the stop motion capture of the characters, in particularly as a smart gun carrier animation.