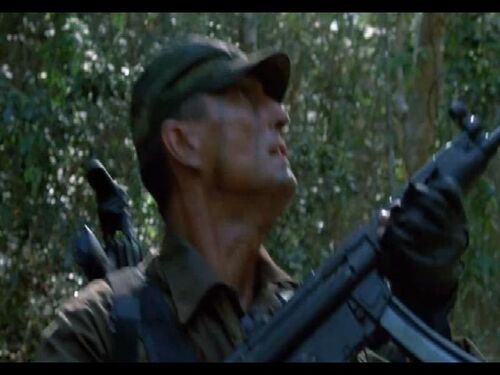 MP5s initially known as the HK54 are manufactured by Heckler & Koch.

The primary version of the MP5 family is the MP5A2, which is a lightweight, air-cooled, selective fire delayed blowback operated 9x19mm Parabellum weapon with a roller-delayed bolt. It fires from a closed bolt (bolt forward) position. The fixed, free floating, cold hammer-forged barrel has 6 right-hand grooves with a 1 in 250 mm (1:10 in) rifling twist rate and is pressed and pinned into the receiver.

The HK94 American import model of the MP5 with a 16in barrel and special safe/semi-automatic trigger group, designed for civilian use. It was made from 1983 to 1989, in three different configurations.

Made from alloy and standard issue in Predator (film) the MP5A3 has a retractable metal stock, the HK94 has a 16in barrel and the MP5K variant is a shortened version of the MP5A2.

MP5s are in use for special forces in Central America, a typical MP5 carries 20 rounds, 800 RPM and effective 100m.

Predator (film)
Both Poncho and Dillon carry MP5s into the jungles of Central America.

Predators (film)
Cuchillo arrives on the Game Reserve by parachute and immediately pulls out 2 MP5Ks which he was carrying and aims them at Royce.


Predators (game)
As in the film Predators, Cuchillo carries 2 MP5Ks.

Various
MP5s are in use in Alien Shooter.

Predator (film)
The film Predator is set in the late 20th Century in the jungles of Central America.

Predators (film)
The film Predators is set on the Game Reserve, Tracker, Falconer and Berserker bring the humans from Earth for hunting, after having been parachuted into the Game Reserve they all group together, with Royce taking charge.