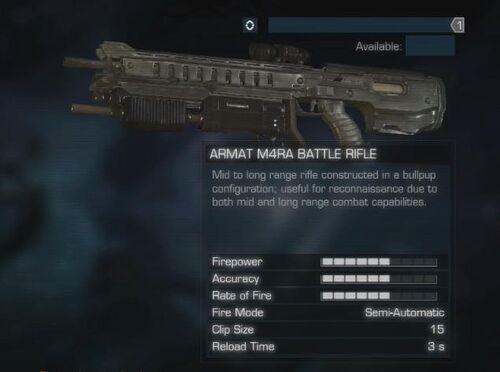 Armat M4RA Battle Rifles are a mid to long range rifle constructed in a bullpup configuration useful for reconnaissance due to both mid and long range combat capabilities.

A M4RA Battle Rifle is in use by U.S.C.M.s on LV426, a semi-automatic weapon with upgradable attachments.

Constructed of alloy and aligned similiar to a NSG 23 Assault Rifle but with a slower reload and similiar upgradable attachments, reloads are by magazine and are loaded into the stock like all bullpup firearms.

Used in combat situations in singleplayer and multiplayer campaigns in Aliens: Colonial Marines.

W-Y ID23 Incinerator Unit
Attachment model Flamethrower this pressurized tank contains a fuel/magnesium liquid combination that is effective at ranges up to 8m.

Armat Smart Targeting Scope
State of the art reconnaissance scope based on existing Smart Gun technology, infrared target tracking system identifies and displays threats at distances of up to 100m.

M4RA Battle Rifle are available in all Aliens: Colonial Marines campaigns with their attachments once they are collected or the achievement is accomplished.

Specification for these weapons are dependent on the weapon's use and vary if using main weapon or attachment.

These weapons appeared in promotional clips of gameplay before the game's release.